Karen Gillan has been taking a star turn of late, headlining some major movies, taking part in the biggest franchises out there, and showing she can more than handle her own when it comes to the action genre. Now, it looks like she’ll get yet another chance to showcase her chops, this time able to double up on the performances. That’s because she’s set to play the main character and the main character’s clone in Dual. And the best part? The two Gillans will be facing off against each other in a fight to the death.

We got our first look at Karen Gillan in Dual with the actress tweeting out an image from IMDB that has her and co-star Aaron Paul preparing to do battle with the aforementioned clone. It’s both a silly and startlingly simple premise with the movie set up in a future that has specific, sometimes violent, guidelines around clones and originals. Check out the first look from the movie and how Gillan is preparing to battle herself.

In Dual, Karen Gillan will play Sara, a woman who finds out that she has a terminal illness that will ultimately take her life. With cloning now a part of society, she opts to have a replica made of herself and things start off with Sara working to onboard the clone into her life. It needs to be a seamless transition after all. But then, things take a turn when the real Sara actually recovers from her illness, and the clone is no longer needed. One problem: the rules around clones mean there can be only one “Sara” and the way to determine who gets to stay and who has to go is pretty brutal. The two have to fight to the death. The last woman standing gets to stick around. That’s what we see Karen Gillan preparing for in the picture. She’s having to practice seeing herself as an adversary.

Dual looks like it is setting up to be something of a satirical comedy/ action flick at its core. While it will play on themes of self and possibly make commentary on cloning as a solution to longevity, it also looks like there will be something of a dark humor quality to it as well. The version of Karen Gillan holding fake nunchucks kind of points to that. Plus, director Riley Stearns has a background with these types of films having helmed Faults and The Art of Self-Defense in the past.

As for Karen Gillan, well she’s seen her star on the meteoric rise of late. Of course, she took on the part of Nebula in the Marvel Cinematic Universe through the Guardians of the Galaxy movies as well as the final two Avengers films. She’s set to reprise the role in Thor: Love and Thunder as well as Guardians of the Galaxy, Vol 3 both of which are coming in the next couple of years.

And Karen Gillan also has shown she can headline her own action film. She recently starred in Netflix’s Gunpowder Milkshake, a shoot ’em-up flick in which she plays an assassin. Though the critical response was only lukewarm for the film, Netflix saw enough to greenlight a sequel. In this way, Gillan has become part of yet another franchise. Dual is due out sometime in 2022. 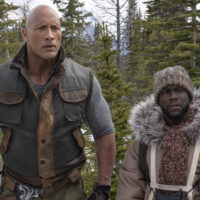 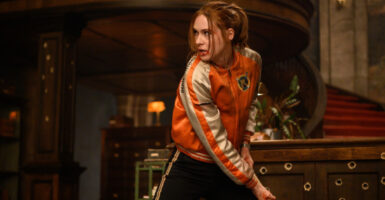 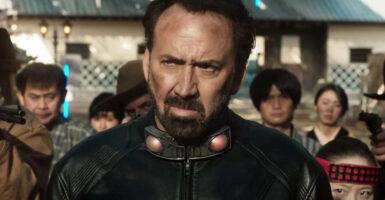 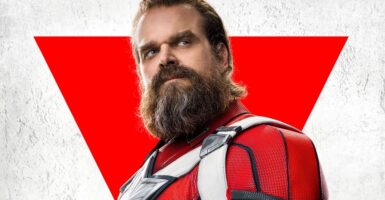 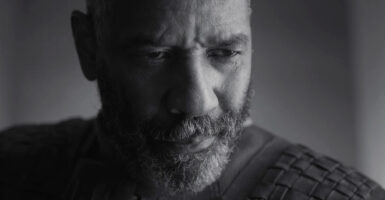