Actor Jensen Ackles has revealed how his upcoming character on The Boys will be introduced. He was recently interviewed on the Inside of You With Michael Rosenbaum podcast and dropped some news about season three. Jensen Ackles has already been confirmed to be playing Soldier Boy, a superpowered member of a group called Payback. According to the actor, Soldier Boy will be introduced in a way he compares with a famous Tom Hanks movie.

So, what happens is – and I don’t think this is any secret, I’m not giving anything away – they kind of find me, and I’ve been essentially in captivity for a while. And so when they do, I’m bearded, and I look like Cast Away. But then they clean me up and I get my superhero outfit back on, and I go to town.

Of course, this is one of those bits of info that just introduces more questions. If Soldier Boy has been in captivity, who has been keeping him captive? In the original comic book series of The Boys, Soldier Boy is a clear analogue to Captain America. Much like Antony Starr’s Homelander character is a funhouse sociopath version of Superman, Soldier Boy riffs on the idea of a patriotic super-soldier. While in the comics, Soldier Boy was largely portrayed as a naive dumbo, Jensen Ackles seems to be implying he will be a more serious character. Combined with the beard and the captivity, The Boys’ show version of Soldier Boy actually seems to have some serious Winter Soldier vibes. But we will just have to wait and see.

The Boys first premiered on Amazon Prime in 2019 and was an immediate hit. While the Marvel Cinematic Universe largely keeps a fun, heroic tone, its main competitor, the DC Extended Universe films, has struggled to find its niche. Along with Amazon Prime’s other comic book adaptation, Invincible, The Boys swiftly cornered the market on ultraviolence and dark humor in TV superheroics.

Garth Ennis and Darick Robertson’s DC Comics series tended to leave the commentary as simple as “what if superheroes were actually bad?” In contrast, the show developed by Eric Kripke has actually managed to find a more nuanced view. The Boys is as much a critique of corporate ethics and the American legacy of eugenics as it is a show where a guy with laser vision kills people. Adding Jensen Ackles as a super-patriot can only add even more layers.

For his part, Jensen Ackles is no stranger to high concept television. As one of the stars of The CW show Supernatural, he is already a fixture of Comic Cons and action scenes. He is also currently working with Warner Bros for an undisclosed new DC Extended Universe project. It is worth noting that the showrunner of The Boys, Eric Kripke, also created Supernatural. Kripke is sure to know how to use Ackles to maximum effect.

And it turns out that The Boys franchise is a growth market. Amazon Prime has already announced an animated spinoff anthology show, entitled The Boys: Diabolical. That show has promised to dig more into the backstory of The Boys universe, and will feature talents like Seth Rogen, Awkwafina and Broad City’s Eliot and Ilana Glazer. Eight episodes of that series have already been promised. Another spinoff called G-Men (a riff on Marvel’s X-Men) is currently in development. The third season of The Boys is set to be released on June 3, 2022. 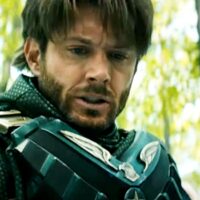