Emily Blunt has been a fan favorite when it comes to casting potential new members of the Marvel Cinematic Universe. The actress has made a name for herself in the genre sphere with awesome performances in movies like Edge of Tomorrow, Looper, and A Quiet Place. There has been a lot of scuttlebutt about whether or not she would actually be joining the superhero franchise and what role she might be taking. Well, if you have been hoping to see her join the Marvel family, we have some good news for you today.

Thanks to our trusted inside source – the same one that gave us our confirmed scoop about Josh Brolin returning to the Marvel Cinematic Universe as Thanos – has told us that Emily Blunt is absolutely in direct talks with Marvel to join the superhero ensemble. On top of that, we are being told that the role she is negotiating for would be a hero. With everything we have heard, we are almost willing to bet everything that she is angling for the role of Sue Storm in Fantastic Four. She has been rumored for the role before and fans are very much on board with the idea of her and husband John Krasinski playing the husband and wife duo of Reed Richards and Sue Storm. Whether or not Krasinski is part of these talks remains unclear.

Granted, it is possible that Emily Blunt is not specifically in talks for the role of Sue Storm, but looking at the upcoming slate of Marvel Cinematic Universe movies, it is the role that makes the most sense. Blunt is undeniably a high-profile star who would almost certainly be the kind of actress that the Marvel Cinematic Universe wants to see become an anchor for the next decade of films and stories. Sue Storm and the Fantastic Four are probably going to be integral figures for the larger storyline Marvel has in store for their next phase of films and shows. Nabbing Blunt for the next big chunk of their storytelling experiment would be an undeniable win.

However, we should reiterate that our source is not confirming (or denying) that Emily Blunt is specifically in talks for Sue Storm. There could be another hero role that she has an interest in and wants to try and snag. If that is the case, we are a little in the dark as to what role that would be. There could be some characters coming up in films like Black Panther II, Guardians of the Galaxy Vol. 3, or Captain Marvel 2 that we are not yet aware of. If she does end up in one of those movies, it will be interesting to see what role she decides to take.

We will next be able to see Emily Blunt in A Quiet Place Part II. If more of these scoops about her being involved with the Marvel Cinematic Universe continue to pop up, you can bet she will be getting asked about it when she has to do press for that sequel. We will have to wait and see exactly what role she will end up taking, but we are going to once again double down on the idea that she will be the new Sue Storm. 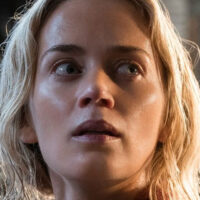