See Dwayne Johnson Announce The Trailer Release For His Next Blockbuster

It won’t be long until Dwayne Johnson joins the superhero ranks, making a much-anticipated debut in the DC Extended Universe coming this fall. The way things are tracking, this could be a blockbuster’s blockbuster considering Dwayne Johnson is one of the biggest talents and draws out there on the big screen these days. And it looks like with this movie they’ve taken the time and care to make the flick as big as possible, bringing on a possible tone shift for the entire DC franchise. So one can see why Dwayne Johnson would be excited about what’s to come, taking the time to even hype the coming trailers for the movie.

Dwayne Johnson took to Twitter on Monday to remind everyone that the next Black Adam trailer would be hitting on June 8th, and based on what we’ve seen, even in limited fashion so far, the results could be pretty amazing. The post on Twitter has Dwayne Johnson as Black Adam standing on a lift on set, with a behind-the-scenes shot even lending its own gravity and pulse. That’s saying something considering we aren’t even looking at all of the bells and whistles. Check out what Dwayne Johnson posted and get a sense of just how he cuts the cloth in the superhero role.

While the next Black Adam trailer is set to drop later in the week, the movie itself won’t hit the big screen until October 21st of this year. That hadn’t been the original plan with DC targeting a summer release out of the gate. But Warner Bros. had to shift some of that around with the studio still, in some ways, dealing with the after-effects of the Covid-19 pandemic. Regardless, when it does finally hit the big screen, fans will be treated to a version of Dwayne Johnson we really haven’t seen before. Though he’s now a superhero, the Black Adam character will be a darker and more violent character than some of what DC has done in this universe. There’s definitely been an anti-hero vibe for Dwayne Johnson in this one.

In addition to Dwayne Johnson, Black Adam will introduce a number of others to the DC Extended Universe as well. That’s going to be in the form of the Justice Society of America, all of whom will make their debuts in this franchise. Among that group will be Pierce Brosnan as Doctor Fate, Aldis Hodge as Hawkman, Noah Centineo as Atom Smasher, and Quintessa Swindell as Cyclone. The overall plot of the movie has been kept relatively under wraps, but from early looks, it appears that Black Adam is awoken and at least starts the movie at odds with a few of these characters.

In all, it’s easy to see why Dwayne Johnson is excited about this new venture. Combining his talent and charisma with a comic book story is about the perfect pairing and there’s little doubt this movie will deliver. We’ll have the newest Black Adam trailer coming for you later in the week. 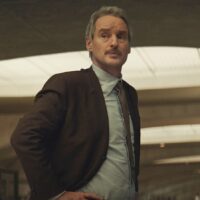