Black Adam will not be in theaters until October 21, 2022, but that does not seem to be stopping Dwayne Johnson from piling sneak peek after peek for the upcoming film. Just yesterday, we got a monochromatic look at Johnson portraying the ancient, mystically-empowered antihero (who will likely still find a way to toss a “candy-ass” in there somehow. Today, the once and future most electrifying man in sports entertainment posed a video on Instagram showing him striding in the shadowy depths of some production lot in the Black Adam costume. Take a look at Dwayne Johnson as Black Adam, we dare you:

As you can see, Dwayne Johnson teasingly just gave us a look at himself in costume from the rear, so we cannot actually see the classic Shazam thunderbolt he is presumably wearing. It also must be said that while Johnson is a famously very large and muscular man, it is nearly impossible to tell whether he is wearing a skintight costume that merely accents those famous muscles, or if the Black Adam costume is literal bodypaint. If that is the case, Dwayne Johnson might have a problem getting a PG-13 rating for the movie, aside from the much-ballyhooed angle that Black Adam has no problem killing people that get in his way. It could be brought up that Henry Cavill’s Superman, the biggest boy scout of them all, killed someone in the very first installment of the DCEU movies, but presumably, the difference will be Black Adam does not feel bad about it, and that makes him edgy and dark.

Dwayne Johnson captioned the video himself in costume with “We go to work. The wolf is always scratchin’ [wolf emoji],” which presumably is a reference to the song “Wolf Totem” by the Mongolian heavy metal band The Hu playing during the video. He also appears to have been adopting the hashtag #maninblack as branding for his DCEU character, which might be an uphill battle against legendary country singer/outlaw icon Johnny Cash’s identification with “the Man in Black” (and to a lesser extent, the extended works of Stephen King). Still, Dwayne Johnson is an undeniable master of social branding, so if anyone can do it, it’s him.

According to our trusted and proven sources, Dwayne Johnson is being positioned as the center of the DCEU going forward. This makes a lot of sense, given that Johnson is one of the most globally successful and recognizable figures in film, television, tequila branding, and professional wrestling. While Superman is generally considered the tentpole character of DC Comics as a whole, Warner Bros has consistently struggled with solo movies for the character since Christopher Reeves’ portrayal of the character. While Henry Cavill has been overall accepted as the modern standard of the character, it seems very up in the air if and when he will return as The Last Son of Krypton. And since Dwayne Johnson has been very vocal with his desire to see Black Adam beat up Superman, we may be seeing that showdown sometime soon. 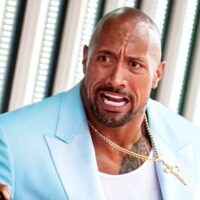