The release of Thor: Love and Thunder is less than four months away, but apparently filming has not wrapped on the first Part 4 in a solo Marvel film franchise. Reports are emerging that Christian Bale is in the midst of reshoots in the role of the movie’s antagonist Gorr the God Butcher. With fans already in an uproar over the lack of a trailer, what could this news mean?

The report comes from Jeff Sneider of The Ankler (via The Direct) who says the Gorr actor is busy in Manhattan Beach, California on Thor: Love and Thunder reshoots. Sneider also implies that the reshoots are the reason why fans are still waiting for a trailer. If so, it seems like we’ll still be waiting for a trailer for some time to come.

If the stories about the reshoots are true, then it raises the question of why it’s Christian Bale in the reshoots and why none of the other principal actors are mentioned. Neither Sneider nor anyone else provides any information as to why, which opens things up to pure, barely supported speculation. Which is fine, as long as you remember that’s what it is.

Marvel has released precious little official information about Thor: Love and Thunder and much of the information we have comes from anonymous leaks and merchandise advertising. From what little of the Christian Bale villain we’ve seen so far, it doesn’t appear as if the movie’s version of Gorr will look completely like the character of the source material. For example, in the supposedly leaked photos below, Bale looks almost like a marble statue, and lacks the more alien physical features of the Gorr of the comics. Below the tweet, you can see an image of Gorr from the source material.

So — and this is pure speculation, supported by nothing — what if the reason Christian Bale is currently in the middle of reshoots is because someone’s mind has changed about the design of Gorr the God Butcher? If, hypothetically, it was decided either by Taika Waititi or by Marvel Studios to make Bale’s version of Gorr look more alien than he did when he was first filmed, perhaps the scenes would need to be reshot with Bale in extra prosthetics, or perhaps while fitted with motion capture apparatuses so the extra tendrils or whatever can be added in post production.

Here’s some more complete speculation — can you really call yourself a “God Butcher” without butchering some gods? Russell Crowe will apparently be playing Zeus in the film so his head might be on the chopping block, but other than that we haven’t heard of a lot of gods being cast in the film. In order to appear as a threat to Thor, we need to see Gorr kill some gods. Maybe that’s what the reshoots are for. Perhaps Waititi has called Christian Bale back so he can cobble together a god butcher montage? You know, kind of like those ’80s training montages, except rather than Sylvester Stallone first not being able to catch the chicken and then after some working out he totally catches the chicken, we get a montage where Gorr the God Butcher… kills gods.

Whatever the reshoots are for, we should all just hope they get wrapped up in time for Thor: Love and Thunder to hit its release date of July 8. We can have late trailers, but if we get more delays that’s when things get ugly. Bale can only spend so much time yelling at the crew — finish it up. 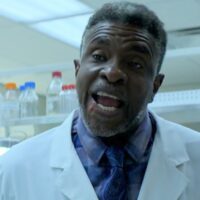