It should come as no shock that Heidi Klum turns heads wherever she goes. She has been a supermodel for many years and was the first-ever German-born model to become one of the Victoria’s Secret Angels. Klum recently posted a pic of her on the red carpet for the premiere of the sci-fi thriller, Moonfall. The pic posted on her Instagram shows the model in a tight latex outfit that looks to be every part sexy and futuristic. She could have very well been cast in The Matrix. You can see the image below:

Heidi Klum boasts a whopping 9.1 million followers on her Instagram and amassed well over 40,000 likes for this picture. She currently has the comments turned off for this post, which is smart considering the negativity that exists on social media. Plus, who would be crazy enough to say anything negative about her? She looks amazing. At 48 years old and after four kids and the myriad of jobs that she is constantly a part of, Klum is still a show-stopper.

Besides being a supermodel of massive fame, Heidi Klum has been one of the main hosts of the massively successful reality show, Project Runway. She hosted the show from 2004 to 2017 before leaving to start another fashion designer-based reality show, Making the Cut, for Amazon Video. Project Runway has gone on for 19 seasons and has spawned over 30 international adaptations. The show originated on Bravo for five seasons, before heading to Lifetime for the next 11 seasons. It has since returned to Bravo after the Weinstein Company went bankrupt. Karlie Kloss has taken over hosting and judging duties for Klum.

Being an internationally known model and TV personality is clearly not enough for Heidi Klum, as she recently took to starting a career in music. She was featured in a song by the DJ duo, WeddingCake, which is a combination of Tom Kaulitz and Devon Culiner. The song called, “Chai Tea with Heidi”, also features legendary west coast rapper, Snoop Dogg. Honestly, Klum’s vocals aren’t half bad in the song, which features a more EDM style. She was recently interviewed about her introduction to music, claiming that she “knows people make fun of her scratchy and high-pitch voice.” She also claimed that she doesn’t care about being made fun of. She has achieved so much success that haters probably don’t affect her. Do you Heidi.

There have been no plans revealed on whether or not Amazon Prime Video plans to renew Making the Cut for the third season but rest assured, Heidi Klum will certainly find work elsewhere. She could start a brand-new fashion-inspired show and it would likely be picked up by some network. That’s how popular Klum has become in the fashion reality show space. She also does have a shot at a budding music career after landing a heavy hitter like Snoop Dogg on her debut single. Maybe we will see a full album come out in the near future. 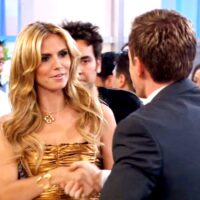