In a new Black Adam promo, Dwayne Johnson pokes fun at Kevin Hart with some CGI.

There are some Hollywood friendships that seem to overtake a career, like a moment Ben Affleck was cast as Bruce Wayne/Batman in the DCEU, fans started wondering when Matt Damon would land the role of Dick Grayson/Robin. Seth Rogen and James Franco also developed the kind of friendship that fans kept waiting for the other to show up when one of them came out with a new film. One of the newest and most wholesome friendships in Hollywood in recent years is between Dwayne Johnson and Kevin Hart, and the latter took to his Instagram for the usual trolling of his buddy in a promo for his new film, Black Adam.

In the post, The Rock talks about his excitement for the release of his new film, which he touts as the realigning of the balance of power in the DC Universe, Black Adam, and then moves to a tiny statue of his character with Kevin Hart’s head superimposed on it. He asks if Hart will be dressing up as Black Adam for Halloween, to which the Hart head responds with a vague answer of depending on who you ask, prompting the actor to push over the statue. It isn’t the first time Dwayne Johnson and Kevin Hart have been connected over the Halloween holiday, as Hart dressed up one year as Johnson from one of his first and very famous photos in a black turtleneck, gold chain, and fanny pack.

Dwayne Johnson and Kevin Hart’s friendship blew up online when they starred in an action comedy together called Central Intelligence, following a reformed fat kid (Johnson) who turned into a beefy CIA spy, returning to his old friend and high school popular kid (Hart) for help. While Johnson’s character severely overestimated his friendship with the former prom king and high school athlete, and the CIA informed Hart of his old friend’s mental decline, the two discovered a new adult friendship by the end of the movie. While the film was mediocre with the fans and the critics, it did create a dynamic duo that continued to entertain the masses.

The two reunited in the soft reboot/sequel to the Robin Williams classic, Jumanji, in the 2017 hit Jumanji: Welcome to the Jungle and the 2019 sequel Jumanji: The Next Level. The first reimagined the premise of getting sucked into a board game to the players being sucked into a video game, sending four teenagers to the dreaded jungle to play as the game’s heroes, played by Dwayne Johnson, Kevin Hart, Karen Gillan, and Jack Black. The movies served as a beloved member of the rare club of reboots and long-awaited sequels that worked, joining Top Gun: Maverick and It.

While Dwayne Johnson is the one in the spotlight for the new release of Black Adam, something that could very well reboot the failing DC Universe in a way to compete with the Marvel Cinematic Universe, it is no surprise that he included his friend, Kevin Hart, in the festivities. Who knows, maybe this indicates that Hart will appear in the DCEU at some point in the future. 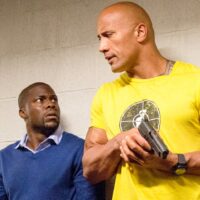