Hey guys, remember two years ago when everyone went ape shit over the Teenage Mutant Ninja Turtles remake because it was being produced by Michael Bay and his Platinum Dunes imprint, and it had nothing to do with mutants, ninjas, or turtles? Good times. And here we are, a thousand rumors, casting stories, and toy photos later, and Paramount has finally given audiences their first look at Jonathan Liebesman’s hopefully bossanova reboot by premiering its long-awaited trailer. Not to all audiences, however. Just the ones lucky enough to be attending this year’s CinemaCon in Las Vegas; because when you’re in Vegas, there’s nothing more exciting than watching motion-captured footage of grown men acting like turtles. Seriously. That sounded like a joke, but I’m entirely too invested in this damned movie.

Will Arnett, who plays April O’Neil’s colleague Vernon Fenwick, came out on a Segway (as he was wont to do as G.O.B. Bluth on Arrested Development) to introduce the trailer. And while some accounts are pretty skimpy on the details, we’re lucky enough to have a report from our sister site Cinema Blend, whose Eric Eisenberg was on hand and served up a full description of the entire trailer.

Oh yeah, and that’s the look of the new logo up top. Not too much to say about it, though.

Anyway, the trailer begins with a voiceover from the Shredder (William Fichtner) as he talks about a great city being destroyed by violence and fear, all while our fearsome foursome are kicking hoodlum asses in the dark and April (Megan Fox) is recording them on her phone. This sounds like familiar behavior. The trailer also gives us an update on the Turtles revealing their identities to April, which of course causes her to faint. Does anyone actually faint in these kinds of situations?

But the biggest surprise in all of this is revealed through a few quick flashes, as audiences learn that the Turtles were actually created by Shredder himself, with the help of April’s father. I could go on for hours talking about what kind of ramifications this reveal could lead to, but at this point I’d prefer to just wait and see it all for myself. And then I’ll go on that hours-long rant, all while eating cold pizza.

Thankfully, Eric also gets into the look of the Turtles themselves, something that many of us have been wary of. Sadly, it doesn’t sound like the real thing gets much better than the toys and leaked poster.

Outside of the change in the origin story, the biggest reveal was the look of the turtles themselves. While the bodies looked fine, the thing that gives me pause is the look of their heads. While it’s obviously a challenge to find some kind of middle-point between real life turtles and humans, the design seems to be stuck in a weird middle point where it just looks a bit off. In addition to being out of proportion with their bodies, they are also a bit weirdly shaped and look… off.

Not that actual turtle heads are proportionate to their shells, but we expect more from anthropomorphic heroes. Glad to hear this trailer sounds nothing like the alleged trailer that some Reddit user lied about a while back. We can all watch the trailer together when it releases next week, ahead of Marvel’s Captain America: The Winter Soldier. 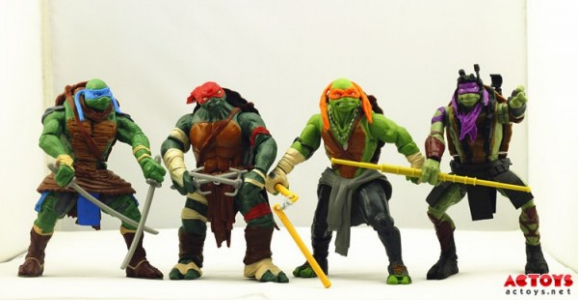