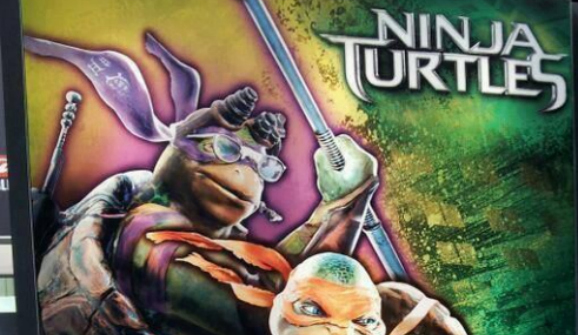 The long-awaited Teenage Mutant Ninja Turtles reboot is probably one of the most divisive movie properties in Hollywood. While many TMNT fans would love to see a new movie with an updated cast and special effects, there are many others who hate the fact that Michael Bay and his production company Platinum Dunes are producing the film. Most of the Platinum Dunes remakes are just terrible, such as Friday the 13th, A Nightmare on Elm Street, and The Texas Chainsaw Massacre. Well, while it’ll still be a while before we can see TMNT and judge for ourselves, a rumored breakdown of the first trailer hints at what we may be in for.

The first teaser trailer is rumored to be attached to next month’s Captain America: The Winter Soldier, but an anonymous user on 4chan (yes, the bowels of the Internet and the birthplace for Internet trolls everywhere) claims to have seen the trailer and has provided a full description. Considering the source, take this trailer breakdown with a giant freakin’ grain of salt.

The trailer allegedly starts off at night in New York City, with the sounds of crime and police sirens everywhere. We then hear a voiceover of Master Splinter telling the Heroes in a Half-Shell about the dangers of revealing themselves to the public. From how it’s described, it almost sounds like it might be a deleted scene from the original Teenage Mutant Ninja Turtles movie. (The typos are verbatim from the original post.)

>We open to a shot of NYC at night.

>we hear the voice of Master Splinter: ‘You must never reveal yourselves to the ones outside on the surface.’

>We get a quick shot of a large, brutish figure running forward on a building rooftop, quickly leaping over an alley.

> Black. ‘For if they are to discover the truth, they will not understand what you are.’

>Black ‘They will have fear of you. That is why you must always keep yourselves concealed.’

>Finally, we see the semi truck stopped completely. The police cars drive up behind it and stop. The cops get out.

>Their headlights illuminate the open back of the semi, revealing five members of the foot clan knocked out cold and hanging from the ceiling.

The trailer then continues with Master Splinter addressing the Turtles, who we can barely see. It seems that Megan Fox’s April O’Neil will also be featured in the trailer. Considering that she’s the only recognizable movie star in the remake, it’s probably a good idea that she’s on hand for the first trailer. We then see Raphael in action, as we hear the voice of someone menacing, probably The Shredder.

The look on the first cops face basically says ‘what the *beep* am I looking at?’

>We cut to black and open on the four turtles, shrouded in darkness and we can barely see them, sitting in front of Master Splinter, who’s hair is grey instead of brown. Splinter asks ‘Do you understand, my sons?’

>We see Megan Fox’s April O’Neil looking through the fence at night like we saw in the set photos. We hear a voice ask ‘Can you tell me what happened?’

>We cut to black again and we see her in what looks like the middle of a very dark factory on the floor with several foot clan soldiers standing over her, rifles in their hands. She replies ‘…something saved me’

>Suddenly, Raphael lands in between the foot clan soldiers and April and whips out both Sais. He gives the foot soldiers a grin and-

>We cut to black again.

>We hear a growling, badass voice. We all know exactly who this is. ‘I want them found. I want them brought to me.’

>Music starts up around here. It’s only drums, but it’s badass. It starts out slow, but gets much faster.

The would-be trailer then features the Shredder as it cuts back and forth between action shots of the Turtles, April O’Neil, and Vernon Fenwick (Will Arnett) — and, surprisingly, Baxter Stockman. It will be interesting to see if the new reboot will feature multiple villains, and if this trailer description is true, a pre-mutated Baxter Stockman just might be in the new movie too.

>We see a shot of Mikey and Donatello walking in the sewers, Don with his bowstaff resting on his shoulder.

>We hear the voice again ‘They cannot hide from us.’

>A group of foot clan soldiers walk through the sewers with their rifles trained forward.

>’I will exterminate them…every last one’ (This sounded *beep* scary, the voice is awesome. It sounded pretty cliche, but the voice just totally makes it believable.)

>Finally, we see him: The Shredder. He steps out of shadows and looks forward. He throws his arm downward and two blades pop out of his wrist armor.

>We get our montage here. From what I can remember, we get to see Raphael chasing what I’m pretty sure is Karai on a rooftop, Will Arnett’s character grinning at April inside her office, the turtle van, Baxter Stockman (pre mutation), Leo dueling foot soldiers in the middle of some high tech room, a motorcycle landing on top of a semi truck in the middle of a snowy forest during a chase, and the turtles captured from the set video that was released back in august. There’s more, I just can’t remember.

>During the montage it says ‘HEROES’ ‘IN’ ‘A’ ‘HALFSHELL’ in between shots.

>Finally, we get our title card. ‘TEENAGE MUTANT NINJA TURTLES’ and ‘SUMMER’

While this may in fact be a description of the upcoming trailer for Teenage Mutant Ninja Turtles, I remain highly dubious considering the source. If this person did see it, why go to 4chan to post your findings? Why not go to Reddit or some online platform with a little more credibility than fuckin’ 4chan? Buyer beware!

There are no official plot details available for TMNT at this point, but it seems likely that it will feature the Turtles, Splinter, and the Shredder’s origin stories. According to TMNT co-creator Kevin Eastman, the movie will be a mix between The Avengers and The Raid: Redemption, so it’s going to be interesting to see how this movie turns out.