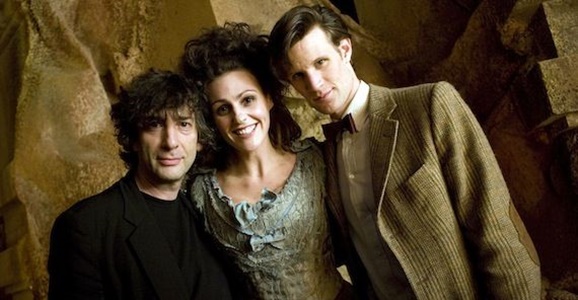 In retrospect, it’s kind of amazing that it took Neil Gaiman as long as it did to write an episode of Doctor Who. I mean, he was always one of the first names mentioned whenever people talked about people who should write Doctor Who. But even after the show regenerated into its modern incarnation in 2006, it still took him several years to contribute his first episode. Thankfully, “The Doctor’s Wife” was more than worth the wait, earning Gaiman a 2012 Hugo for Best Dramatic Presentation, Short Form. He returned the very next season with “Nightmare in Silver,” which was fun, but not as brilliant as “The Doctor’s Wife.” So, will Gaiman return for a third Who episode?

As reported by GeekTyrant, Gaiman says that the producers regularly ask if he’d like to write another Who episode, and his standard answer is, “Yes! But not yet!” It may be sooner rather than later, however, because Gaiman says he’s keen to write for current Doctor Peter Capaldi. Gaiman says, “It would be a very sad thing if I lost my chance to write for a grumpy, Scottish Doctor.” On that we can agree, sir. So make it happen already!

Beyond writing for Capaldi’s amusingly cranky Time Lord, Gaiman also has a couple of specific Who goals he still wants to check off. He says:

I haven’t done an episode set on Earth yet, and I haven’t created a new monster. So there are boxes left to tick. And there’s part of me that feels … I haven’t scared anybody yet. I’d love to do something that sends adults behind the sofa too and makes them wee.

An Earth-set episode could go either way depending on the story, but a properly scary Gaiman episode? That I would love to see. He’s dealt with creepy subject matter on TV before on his Neverwhere series and on his standout Babylon 5 episode “Day of the Dead.” Who has always worked some scary material in among the lighter-hearted romps, and the modern series has definitely embraced that with episodes like “Blink,” “Midnight,” and “Listen.” I can think of few things that would please me more than to see Gaiman let loose in the Doctor’s world with a mandate to scare the piss out of us.

Given that Capaldi is approaching 60, there’s no telling how many seasons he’ll stick around. Who knows, as much of a fan of the show as he is, they may have to pry him away with a crowbar. But if the possibility of him only sticking around another season or two is incentive enough to get us another Gaiman episode sooner rather than later, I’m okay with that.