Although the anime was highly influential on the Wachowskis’ The Matrix, Ghost in the Shell isn’t a huge part of American pop culture. Like most anime, it’s seen as a cult oddity that only appeals to fans of the genre. But in Japan, Ghost in the Shell is a humongous smash hit that spawned a sequel and numerous manga editions.

According to Animenewsnetwork.com, the prequel series Ghost in the Shell: Arise opens in Japan this June, and now the first eight minutes of the Japanese prequel series are available for your viewing pleasure. The above video doesn’t have English subtitles, but if you click the closed captioning icon, subtitles should appear.

The video is an introduction to the series’ murder mystery involving the city’s Lieutenant Colonel, although some of its duration is dedicated to Ghost in the Shell: Arise‘s opening title sequence that we saw a few months ago. If you’re a fan of the original Ghost in the Shell, then this new prequel series is a must-see!

The prequel takes place in the year 2027, two years before the original Ghost in the Shell film. It centers on a young Motoko Kusanagi, a female cyborg and leader of Section 9′s assault team, and her partner Batou. Section 9 is the police squad on the interactive network, tasked with protecting it from hackers and criminals. Kusanagi and Batou investigate a terrorist attack on the city, while Kusanagi is suspected to be part of the terrorist plot.

There is no release date for Ghost in the Shell: Arise in the States yet, but there will be a Blu-ray release that will include all four 50-minute episodes, and a limited theatrical run of the prequel series’ first two episodes is planned.

You can watch the first eight minutes of Ghost in the Shell: Arise in HD below. Beware, there are no English subtitles available with the below version. 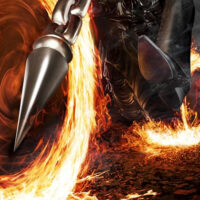