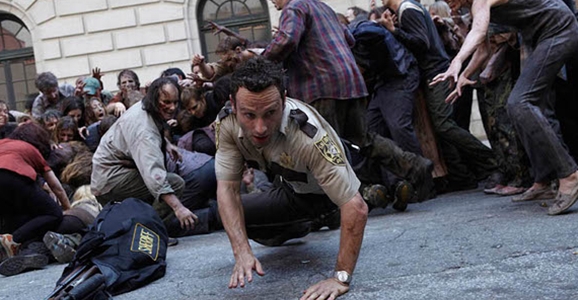 With the recent box office success of World War Z, the zombie trend shows absolutely no signs of diminishing returns in pop culture. Zombies are at the height of their popularity among genre fans and general audiences alike, so what is a better way to celebrate the undead than with a three-day-long marathon of The Walking Dead on AMC? Starting on Thursday, July 4, geek mogul Kevin Smith will host a three-day event that will celebrate both our nation’s birthday and the eminent zombie apocalypse.

The Walking Dead marathon will also serve as a preview of the zombie survival TV series’ upcoming fourth season. Throughout the entire Fourth of July long weekend, Kevin Smith will interview the cast and crew of The Walking Dead from their Atlanta, Georgia shooting location. The show is currently shooting season four, and Kevin Smith will also introduce exclusive behind-the-scenes footage of the extremely popular zombie TV series.

The Walking Dead: Season Four Preview Weekend would also work as a good precursor to AMC’s The Walking Dead panel at San Diego Comic-Con in a few weeks. Every summer since 2010, The Walking Dead has been one of the biggest attractions at Comic-Con, and this year will be no different. The annual pop culture extravaganza will also give the cast and crew a much-needed break during the long shooting schedule in the Georgian heat.

Although The Walking Dead season four doesn’t begin until October, AMC is taking every opportunity to promote their most popular TV series. With Mad Men wrapping up its run next year, and Breaking Bad bidding farewell at the end of September, The Walking Dead is the basic cable network’s last surefire hit. It’s a shame that AMC’s other genre offerings haven’t panned out as well as Mad Men, Breaking Bad, or The Walking Dead, but the network does have some interesting science fiction TV series in the works.

Director Ridley Scott is currently developing a TV series with Generation Kill’s Evan Wright and The Walking Dead visual effects wizard Greg Nicotero. Although there isn’t much else known about the new science fiction series, the impressive names involved should be enough for genre fans to flock to it.

After creating the short-lived Rubicon, writer Blake Masters will next take shot at creating a piece of mind-bending science fiction in the TV series Line of Sight for AMC. It will follow a National Transportation Safety Board inspector who survives a mysterious plane crash, and then becomes obsessed with discovering what caused it.

Finally, Oblivion and Tron: Legacy’s Joseph Kosinski is developing a sci-fi noir called Ballistic City, working with Pacific Rim screenwriter Travis Beacham. They describe Ballistic City as a mix between Blade Runner and Roman Polanski’s Chinatown, unfolding on a “generation ship.” Hopefully, one or more of these new science fiction series will be popular enough to keep AMC a prestigious basic cable network.

As for The Walking Dead, the fourth-season preview marathon will also feature the color and black and white versions of season one’s episodes. Of course, the original and ongoing comic series is completely in black and white, which creates an eerie look and feel. Last year, AMC started post-converting The Walking Dead to black & white to capture the graphic novel’s tone. Sadly, only season one episodes will get the black-and-white treatment during the AMC marathon.

The Walking Dead: Season Four Preview Weekend starts this Thursday, July 4, on AMC, while new episodes will premiere this October.