Fossil Of Ancient Armored Fish May Be A New Missing Link 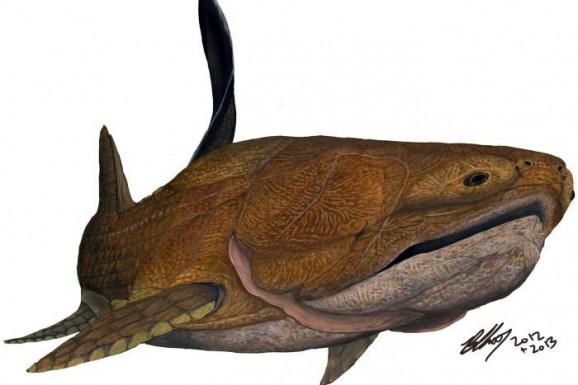 Most people think of the missing link as some in-between species of man along the lines of Cro-Magnon or Neanderthals, or maybe just David Boreanaz. But a recent discovery of an armored fish suggests a different kind of missing link, and is one of the most surprising and important findings in the world of paleontology for quite some time. This may be even more important than the recent discovery that Triceratops are actually Torosauruses.

A team of Chinese and Australian scientists recently discovered the fish—an Entelognathus, a name that doesn’t roll off the tongue or the keyboard all that smoothly—off the coast of a southwest Chinese suburb. The location used to be a tropical sea, way back when China was separate from the rest of Asia. They date The Fish back 419 million years and believe it was roughly eight inches long. It had small eyes inside “bony goggles,” as well as a scaly tail and a head and body covered with armor.

Apparently, back in the day, hundreds of millions of years ago, armored fish called Placoderms controlled the waters, protecting the one ring to rule them all…wait—the scientists haven’t put that all together yet. But they will. Anyway, scientists have never been certain exactly how modern fish evolved, but the discovery of this new specimen suggests that the species was indeed the great ancestors to today’s fish. The fossil predates amphibious fish by some 50 million years and, according to Professor John Long of Australia’s Flinders University, The Fish “fills a gap between an extinct class of animals and the entire living fish fauna on the planet, which is 30,000 species.” It also helps chart the evolution of the first vertebrates. 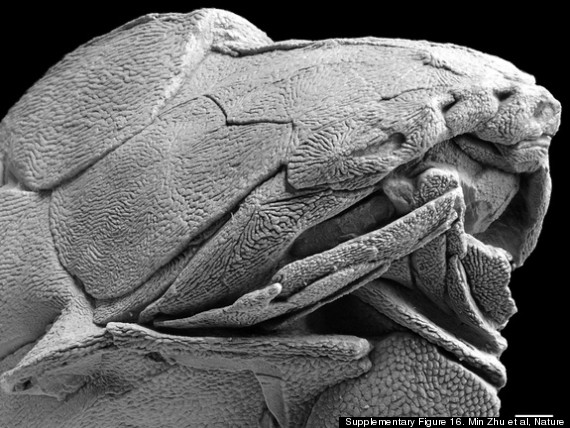 One of the most important characteristics of The Fish is the jaw, which functions much like those of modern fish. Scientists believe it may have been one of the first creatures with such a trait—it didn’t, however, have any teeth—and that the jaw further confirms the The Fish as a previously missing link between the earliest Placoderms and modern fish. Jawed vertebrates branched into two groups a long time ago, one of them being fish with cartilage, such as sharks and stingrays, and the other being bony fish, four-legged animals, and humans. Before the discovery of The Fish, scientists thought that the two groups had a common ancestor that looked more like a shark with a skull made of cartilage and no armor.

In addition to the jaw, The Fish is one of the earliest creatures to have what we’d call a face. And what a lovely face it is as that, eh? In fact, I predict a new prehistoric ocean horror movie in which The Fish gobbles swimmers. Then, eventually, we’ll get a Jaws vs. The Fish duel, which sadly for our new old fish friend probably wouldn’t end well.