Zoe Saldana was recently a guest on the hit YouTube series, Hot Ones, which brings celebrities in to answer uncomfortable questions while eating ridiculous spicy wings. While on the show, which you can see below, Saldana spoke about her time as Gamora but compared the process of shooting Marvel movies to being in a “cult.” According to Saldana, “I mean, when you work for Marvel it’s just everything, it feels like a cult, you’re like, ‘What’s going on?’ Like I’m dressed in green for hours in makeup, we must be shooting something.”

What Zoe Saldana is speaking about is the high secrecy that Marvel has for their movies, especially when it comes to big reveals. Most actors don’t know what scenes they are shooting, only they have to act a certain way to keep up that secrecy. Take Tom Holland, for instance, he revealed that his death scene in Avengers: Infinity War was kept secret from him, even when he was shooting it.

We are all quite appreciative of Marvel wanting to deliver some of the most groundbreaking and shocking secrets in their movies via cameos and reveals, but we also understand that it can be quite frustrating for those actors involved. Zoe Saldana has also voiced her frustration with the franchise, as she stated previously that she is tired of sitting in the makeup chair for over four hours while her Gamora makeup is applied. We certainly get that sentiment, but she is just so good in that role.

Zoe Saldana is likely to not have to play Gamora again, as Guardians of the Galaxy Vol. 3 is set to be the final chapter in the story of everyone’s favorite ragtag superhero team. With James Gunn switching to run the DC Films division, he has also previously stated that this is the last time we would see the team together. Granted, Marvel could continue using the characters together, but the team will no longer be together under the direction of James Gunn.

Marvel and the MCU have become a powerhouse in the world of cinema, and that is hugely due to the big secrets that are kept from the audience, and the actors. That formula is likely not going to change either, despite Zoe Saldana being clearly frustrated with it at times. But again, we are all thankful for how Marvel movies are put together, as they have become some of the best-made movies in the world. 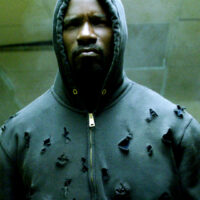 Mike Colter Finally Returning To The MCU As Luke Cage?