See The New Supes In The Boys Season 4

Amazon has just released images of Susan Heyward as Sister Sage and Valorie Curry as Firecracker - two new supes who will be introduced in The Boys Season 4.

Amazon Prime Video just released first look shots of two new supes destined to premiere in The Boys Season 4. The first image above is of Susan Heyward (Orange Is the New Black) as Sister Sage, followed by Valorie Curry (The Following) as Firecracker. According to Variety, other than the fact that both costumes were designed by Laura Jean Shannon–who is also responsible for Jensen Ackles‘s Soldier Boy look from Season 3–Amazon intends to be very tight-lipped about the characters until we meet them in the upcoming season.

One possibility is that The Boys Season 4 will open with the new supes either as members of–or candidates for membership into–The Seven. Season 3 closes with The Seven’s membership roster not even reaching half of its namesake. Supersonic (Miles Gaston Villanueva); Stormfront (Aya Cash); and Black Noir (Nathan Mitchell) are all dead, Starlight (Erin Moriarty) has left the team and is actively campaigning against Vought, and Queen Maeve (Dominique McElligott) is in hiding and presumed dead by the public.

Season 3 ends with only Homelander (Anthony Starr), The Deep (Chace Crawford), and A-Train (Jessie T. Usher) as active members of The Seven. Vought will no doubt be looking to fill the team’s open slots in The Boys Season 4, and countering Starlight’s condemnations with two new woman members would be a completely on-brand move for the mega-corporation. Though, if all there was to them was a PR move, then it would hardly seem necessary for showrunner Eric Kripke and co. to keep so tight-lipped about the pair.

The additions of Susan Heyward as Sister Sage and Valorie Curry as Firecracker aren’t the first castings we’ve heard about in The Boys Season 4. In August it was confirmed that Jeffrey Dean Morgan (The Walking Dead) would join the cast, though so far it hasn’t been revealed who he will be playing. If he does play a supe, then it won’t be the actor’s first time playing a violent crime-fighter.

In 2009’s Watchmen, Jeffrey Dean Morgan plays The Comedian–the murdered government-sponsored crime-fighter whose death instigates Rorschach’s (Jackie Earle Haley) investigation. He also played the late Thomas Wayne in 2016’s Batman v. Superman: Dawn of Justice. Whoever he plays in The Boys Season 4, he’s certainly making sure he remains a contender for the actor with the most varied comic book adaptation roles.

Between Season 3 ending with Homelander’s first public murder, Billy Butcher’s (Karl Urban) terminal diagnosis, Victoria Neuman’s (Claudia Doumit) upcoming run for the Vice Presidency, and whatever revelations come with the introductions of Firecracker and Sister Sage; The Boys Season 4 has no shortage of potential bombshells to deliver once fans get to view it. We don’t know exactly when to expect The Boys Season 4 on Amazon Prime Video, but Variety says it’s currently in production in Toronto. Karl Urban had previously said he expected to be filming the upcoming season through the rest of 2022. 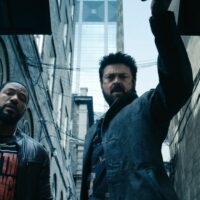 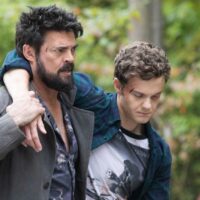