The Triple threat writer, actor, and director Taika Waititi has seemingly taken the film industry by storm since he started appearing in Hollywood about a decade ago. He got his start working on lesser-known indie films and, by Hollywood standards, quickly made the jump to working on Triple-A titles like Marvel’s Thor: Ragnarok. The versatile filmmaker recently sat down with Wired to discuss upcoming projects that he’s attached to, and he offered some fascinating info regarding his new Star Wars film that he is set to both direct and co-write.

Taika Waititi didn’t give away much about what the new film will be about, though he did give us something to be excited about. He told Wired that “It’s still in the ‘EXT. SPACE’ stage…But we’ve got a story.” Even though this suggests that the film is still in the very beginning stages of development, it’s encouraging to know that the framework for the plot is being laid out. Taika Waititi also went on to tease that he writes to lead viewers in one direction and likes to throw a curveball that sends the story on a different course. It seems fans will have to wait to see just what he and co-writer Krysty Wilson-Cairns, have up their sleeve.

While the upcoming movie will be the first time Taika Waititi will be working on a major motion picture for the Star Wars franchise, this won’t be his first time directing in that universe. Taiki Waititi directed the final episode of season one of the wildly successful Disney+ show The Mandalorian entitled Ch. 8 Redemption. He also portrayed the bounty-hunting droid IG-11, who was initially out to capture Grogu (Baby Yoda).

It seems like Taika Waititi’s forward momentum is unstoppable. Considering the relatively short time that he has spent in the film industry, the New Zealand native and father of two has claimed not only an Academy Award and has since been nominated six additional times, but also has both a BAFTA and a Grammy Award in his ever-growing repertoire of recognition.

It is clear that Taika Waititi has certainly been busy. He even mentioned that someone approached him and said, “You need a break, man.” To which he responded, “Yeah, but I feel like I was on a break for 35 years. I’m working now. I don’t want to stop.” He actually just wrapped up production on Thor: Love and Thunder, which is slated to hit theaters on May 6, 2022. Chris Hemsworth reprised his role as Thor for the film, but the movie was also rounded out by some other serious star power. Christian Bale, Matt Damon, Chris Pratt, and Russell Crowe all have roles in the Marvel movie as well. Fans were especially surprised to learn that Crowe would have a sizeable role portraying Zeus, the god of thunder.

Thor: Love and Thunder won’t be released until 2022. However, fans won’t have to wait that long if they want to see Taika Waititi on the big screen. His new movie Free Guy, which he stars alongside Ryan Reynolds and tells the story of a video game character that slowly develops a sense of independent consciousness and free will. The film is slated to hit theaters this Friday, August 13th. 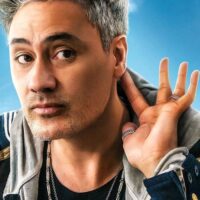