We’ve seen plenty of gods in the Marvel Cinematic Universe, though up until most of them have either been Asgardian, or the cosmic variety like the Celestials of Eternals. Disney+’s upcoming Moon Knight will introduce us to the Egyptian moon god Khonshu, and apparently F. Murray Abraham of 1998’s Star Trek: Insurrection has been tapped to voice the Marvel version of the ancient deity.

IGN reported on the Star Trek star landing the Marvel role on Tuesday. In both the comics and presumably the upcoming Disney+ series, Moon Knight gets his powers from the god Khonshu. In fact, one of his titles he’s known by is the “Fist of Khonshu.” With different interpretations of Moon Knight over the years, the hero’s relationship with Khonshu has often changed, with some versions of the vigilante being friendlier with the god than others. For example, in the volume of Moon Knight that began in 2016 — written by Jeff Lemire with art by Greg Smallwood — the story opens with Marc Spector in a mental institution, where the doctors try to convince him that all of his superhero exploits have been delusions. At first, he not only isn’t sure whether or not to trust Khonshu, but can’t even decide if the god is real.

Known for his Oscar-winning performance as the envious Antonio Salieri in 1984’s Amadeus, F. Murray Abraham first made his personal dent in Trek history by starring as the villain Ru’afo in Star Trek: Insurrection, long before the Marvel Cinematic Universe existed. Ru’afo is the leader of the Son’a, who have partnered with Starfleet to relocate a planet’s inhabitants from their native homeworld. Deeply resenting the affects of aging, Ru’afo and the other Son’a submit themselves to grotesque treatments that stretch their skin to insane proportions. After Captain Picard (Patrick Stewart) gets in the way of the relocation plans, we find out what we thought was an ethically questionable plan is something much more diabolical.

Now that the former Star Trek star has turned his attention to Marvel, he’s about to join an elite list of deities. Along with the Asgardians, more of Marvel’s pantheon is expected to be unveiled with July’s Thor: Love and Thunder. Christian Bale is playing Gorr the God Butcher in the film, so there will presumably need to be gods for him to, you know, butcher. Gladiator star Russell Crowe is confirmed to be appearing as the Greco-Roman god Zeus and as Screen Rant points out, the panther goddess Bast is rumored to appear in the film. There’s no word of Khonshu appearing in the movie as well, but it would make sense.

Whether or not we get to hear Abraham in the Thor sequel, we should definitely be able to recognize his signature voice on Wednesday, March 30 when Moon Knight premieres on Disney+. Oscar Isaac stars as the titular superhero. Ethan Hawke will play the fanatical antagonist Arthur Harrow. 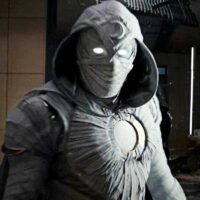