Squid Game has been a huge hit on Netflix. Hwang Dong-hyuk is the writer and director for the series, and he had a very specific vision in mind. The survival series is full of bright colors and simple children’s games, but it’s very much a violent tale of life and death that takes a closer look at society, poverty, debt, the wealth gap, and education. It’s not often that a series tackles issues in such a way on an international scale. These experiences are often different from one country to the next, and yet Hwang Dong-hyuk managed to approach them in such a way that audiences around the world are tuning in for the show. However, their experience may be actually varying in major ways that mean some of the audience, specifically the English speakers, are not getting the same messages.

In Squid Game, characters who are currently in debt are being convinced to play six rounds of simple children’s games. If they make it to the end without dying, they get millions of dollars and a life they are unlikely to have access to any other way. The thing is, most of the people playing are going to die. At the start of the show, one character is trying to convince another to join in the games. According to the English subtitles, she says, “I’m not a genius, but I still got it worked out.” This is a simple line that says, hey, she’s not that smart, and she did it, so you can, too. The line achieves the goal of getting from one plot point to the next.

However, according to Youngmi Mayer, a better translation of that line would be, “I am very smart, I just never got a chance to study.” While this translation does less to satisfy moving the plot along, it tells you a lot more about this character and serves as a deeper look at her place in society, and society as a whole. It is pointing out that she is intelligent and knows it, that she would have liked to go on to higher education if she’d had that opportunity, but that door had been closed to her. We know that this is because she doesn’t have the money. For her, the survival game is a chance for her to do something with her intelligence that could lead to her getting that chance to study, so the line also reveals her own reasons and motivations for wanting to win and earn the money.

Youngmi Mayer broke down this Squid Game line and a little more in her TikTok video below. Be aware that they are very passionate about translations and the lost meaning, so she drops quite a few swear words in her breakdown.

On top of this, English language audiences are having different experiences based on how they view the Squid Game captions.

When Netflix signed off on the English language translation for Squid Game, they likely had no idea how popular this show would become. Outlets are speculating that the series may become Netflix’s biggest show ever, beating out Bridgerton. The show has been so popular that internet providers are filing lawsuits against Netflix for the strain on their services. It will be interesting to see whether Netflix chooses to address the comments around their rough translations and whether they do any better for season two. 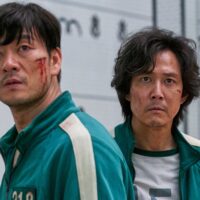