Pierce Brosnan has a ton of time spent up on the screen, but not too much of it has involved him playing a superhero role. While it’s close, and the dude did have a lot of powers (mostly when it came to seducing women) James Bond doesn’t really count in this vein. So it’s going to be something of a turn for the actor with his next role. The Hollywood Reporter has it that Brosnan’s next part will be going the superpower direction when he plays a hero alongside Dwayne Johnson in the upcoming Black Adam film.

In Black Adam, Pierce Brosnan will be teaming up with Dwayne Johnson and joining the Justice Society of America. The former will be playing Doctor Fate and presumably will be taking on the Kent Nelson version of the character. Doctor Fate is a powerful sorcerer whose power is derived from the helmet of Nabu. This gives him control over all manners of spells, telekinesis, telepathy, and even flight among many other things. This could be an awesome role for the actor who will be taking on the first comic book character of his career. At this point, the 68-year-old Brosnan will likely be acting more of a leadership role in the group though it stands to reason we see him don the yellow helmet and get down with some magic as well.

Pierce Brosnan won’t be the first actor to take on the Doctor Fate character in a live-action role, though this will be the first time for him on the big screen. The character that appeared in Smallville was a member of the Justice Society and actually helps Tom Welling’s Clark Kent/ Superman realize the full scope of his powers and his eventual leadership role in the group.

Black Adam is just another in the line of DC Extended Universe movies coming out over the next couple of years. It’s been in development for a few years now and the Dwayne Johnson was originally intended to appear in Shazam! But that was ultimately scrapped. While all the movies are intended to be in the same universe of course, this one will be more aligned with the Shazam! films and could offer more of a comedic bent than some of the other films we’ve seen. In this way, Pierce Brosnan could play really well especially if he’s an older and snarkier version of the Doctor Fate character.

In addition to Dwayne Johnson and Pierce Brosnan, many of the casting decisions have been made for Black Adam. Other Justice Society members will include Noah Centineo as Atom Smasher, Aldis Hodge as Hawkman, Quintessa Swindell as Cyclone. How much this group actually factors into the overall plot of the film remains to be seen. They could just be setting up for their own individual projects or they could be central to the story in how Black Adam on boards his powers.

Black Adam doesn’t have a firm release date yet but is tentatively scheduled for sometime in 2022 after having its December 2021 original date scrapped. No matter for Pierce Brosnan who is still incredibly busy. Over the next couple of years, he’ll take another turn as a thief in The Misfits and an evil fertility doctor in False Positive. There’s also the musical version of Cinderella and then a futuristic film about de-aging in Youth. So his dance card is full. And now he’s also set to add superhero to the resume. 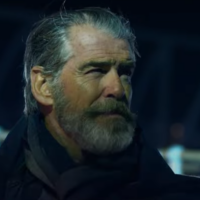