Peter Dinklage has officially been added to the cast of The Hunger Games: The Ballad of Songbirds and Snakes, and now we can't wait to see this film.

Throughout the past few weeks, we have been updated with plenty of casting announcements for the new Hunger Games prequel, The Ballad of Songbirds and Snakes. A ton of new tributes will be part of the growing cast, including Rachel Zegler and Jason Schwartzman. Now, arguably one of the biggest casting announcements comes in form of Peter Dinklage, who has officially joined the film. Dinklage will be portraying a character known as Casca Highbottom. Highbottom is said to be the dean of the academy.

Bringing in Peter Dinklage is a fantastic idea, and it is a bit odd that he hadn’t been asked before to appear in any of the films in the franchise thus far. We all know how amazing Dinklage was in Game of Thrones as Tyrion Lannister, and The Hunger Games is more of that same aesthetic. Dinklage will be the sort of mentor of the young Coriolanus Snow, who is portrayed by Tom Blyth. That role was taken by Donald Sutherland in the original films. However, The Ballad of Songbirds and Snakes takes place years before Snow would be the tyrannical President of Panem. Highbottom is meant to take a special interest and shape the way that Snow leads later in his life.

Another thing of note is that Dean Highbottom (Peter Dinklage) also sets the rules for the game, so we could be seeing how the tributes are managed in the 10th Hunger Games. Rachel Zegler plays Lucy Baird, who is the tribute from District 12. That is the same district where Katniss Everdeen (Jennifer Lawrence) was from in the original films. Baird shocks everyone by defiantly singing during the reaping ceremony, which leads Snow to believe he can use her to win the games after he is made her mentor. They will then decide who is the songbird and who is the snake. See what they did there?

The Hunger Games: The Ballad of Songbirds and Snakes is currently filming, and the film has been given a release date of November 17th, 2023. It will be quite some time before we get to see what this new prequel franchise is made of. We are likely to get more casting announcements through the weeks as well. Jason Schwartzman and Peter Dinklage are two of the biggest actors that have been revealed so far. We could be seeing more high-profile talent added to this new film soon.

Francis Lawrence is set to direct this new prequel. He has handled directorial duties for Catching Fire, Mockingjay Part One, and Mockingjay Part Two. Nina Jacobson and her producing partner Brad Simpson are back. Jacobson has been a long-time producer on the franchise thus far. Lawrence is also serving as a producer. Suzanne Collins, Tim Palen, and Jim Miller will be the executive producers of this new film.

The Hunger Games: The Ballad of Songbirds and Snakes will premiere in November of 2023. This new prequel film is likely to spawn another slate of films, much like the original did. Seeing Peter Dinklage be a cutthroat character is going to be quite exciting. We can’t wait to see how this movie plays out. 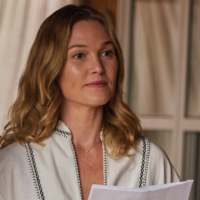 Julia Stiles: A Hit Horror Movie And Popular Streaming Series Have Her Making A Comeback