The Mandalorian season three finally has a release date. Announced at Brazil Comic Con, the next chapter of the Star Wars universe story will hit Disney+ on March 1, 2023. Development for the new season began in April 2020, with production starting in October 2021 due to pandemic-related safety measures. The show officially wrapped in late March 2022.

According to Deadline, The Mandalorian season three is set after the events of The Book of Boba Fett. The story follows Din Djarin as he travels back to Mandalore to restore his reputation as a Mandalorian. Disney released a trailer for the new installment at the D23 expo earlier this year. The clip set up the big conflict on Djarin’s home planet while hinting at storylines from Star Wars Rebels.

Created by Jon Favreau, The Mandalorian is set five years after Return of the Jedi and 25 years before The Force Awakens. The story follows Din Djarin, a bounty hunter who is protecting a Jedi-powered being from the Imperial Empire. Season two ended with Djarin giving Grogu permission to complete his training with Luke Skywalker – which may be explored further in The Mandalorian season three.

Meanwhile, Fett and Fennec traveled to Jabba’s Palace on Tatooine where the latter killed Bib Fortuna and claimed the throne. Mando went on to steal a few episodes during the arc of the spinoff series, The Book of Boba Fett. After choosing Djarin’s chain mail over Yoda’s lightsaber, Grogu reunites with his protector in battle. The pair then flies off in their N-1 starfighter, setting up The Mandalorian season 3.

Meanwhile, Jon Favreau has confirmed that a fourth installment of The Mandalorian will follow season three. The filmmaker made the revelation while speaking to CinemaBlend about the new projects set in the New Republic era. “With television, we’re very lucky that we don’t have to rush things through into an hour-and-a-half, two hours,” he told the publication.

Favreau added that he gets to tell stories slowly. “So as Dave Filoni is doing Ahsoka, it’s very much informing the writing that I’m doing for The Mandalorian after season three,” he explained. This process makes the storytelling more precise. Addressing crossovers that fans can expect, the filmmaker said that determinations are being made organically.

When Favreau first started writing The Mandalorian, with no season three in sight, he worked off a relatively blank canvas. But now things are developing with more specificity. “When I was writing the first season, I could do anything, set it anywhere,” he said. Now, he has to figure out why Mandalorians who wear helmets exist, and why others go about their business without them. “So it really creates very fertile ground for imagination and storytelling.”

Before The Mandalorian season three hits screens in March, fans can catch up on the first two installments which are available on Disney+. 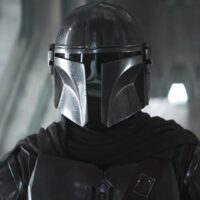