By Kristi Eckert | 4 days ago

The Suicide Squad was an instantaneous runaway hit with fans when it was released in August of 2021 and served as the perfect platform from which to launch the franchise’s newest spin-off series. In anticipation for the upcoming premiere of what will be the most recent addition to the DC Expanded Universe Peacemaker (2022), and in honor of the return of New York Comic Con, streaming platform HBO Max, director James Gunn, and the show’s star, John Cena have been pulling out all the promotional stops. For months John Cena has been popping up on various shows fully outfitted in his Peacemaker “uniform”, most notably on both The Tonight Show with Jimmy Fallon and John Oliver’s Last Week Tonight, and now fans know why. Cena took to Twitter to reveal a hotline that fans can call to hear firsthand an “actual” Task Force X meeting.

The Tweet was brief but jaw-dropping in what it revealed. It read with the simple message, “If you are committed to peace call 1-833-4PSSMKR, “ followed by the telling NYCC (New York Comic Con) hashtag. Take a look at the exciting reveal below.

Upon dialing the number fans will hear a short recording of a Task Force X aka Suicide Squad meeting, which the narrator on the call prefaces with, “[a meeting that] Peacemaker was late to.” The recording, which serves as a delightfully immersive experience, is filled with a whole host of other easter eggs that are sure to get fans even more hyped for John Cena’s new show.

Peacemaker (2022) who in addition to John Cena will star Steve Agee (John Economos), Danielle Brooks (Leota Adebayo), Robert Patrick (Auggie Smith), Jennifer Holland (Emilia Harcourt), Freddie Stroma (Adrian Chase), and Chukwudi Iwuji (Clemson Murn). The series will premier on HBO Max sometime in January of 2022 and will run for a total of eight episodes, five of which were directed by The Suicide Squad (2021) director James Gunn. Particular story details are being kept tightly under wraps. At present, all that is known about the plot is that it takes place after the events that transpired during The Suicide Squad and will focus on John Cena’s character’s origins.

John Cena has certainly made a lasting impression for fans in his portrayal of Peacemaker and the build-up for the premiere of the show has been intensifying rapidly as its release billows closer. For months, fans have been flocking to social media platforms like Twitter and YouTube in order to get their first looks at set photos, and early sneak peek footage. Excitement for John Cena’s Peacemaker was only heightened even further just days prior with the long-awaited release of the show’s first official trailer.

John Cena has demonstrated intense dedication in taking on the role of Peacemaker through his theatrical performance, public appearances, and commitment to adequately promoting the upcoming program. Combined that with what fans have gotten to see so far in the trailer and set photos, it is clear DC’s Peacemaker is certainly shaping up to be a show with the potential to not only meet fan expectations but far exceed them. 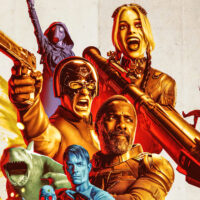