Following months of indecision, Jeopardy! finally announced Mayim Bialik and Ken Jennings as permanent hosts of the popular quiz show. Executive producer Michael Davies revealed the completion of deals with The Big Bang Theory star and former champion in a note to fans via Deadline. “We have so much Jeopardy! to make, and so many plans for the future, that we always knew we would need multiple hosts for the franchise,” he wrote. Citing the spike in ratings, he said everyone is grateful that Mayim and Ken stepped in and stepped up to put the show in a position to succeed.

Davis also confirmed that the Blossom alum will host Celebrity Jeopardy! on ABC this coming season, with Jennings taking to the main podium for season 39’s first batch of episodes. Jeopardy! will see Mayim Bialik return to the flagship series in January. The actress has a slightly complicated schedule as she juggles the game show’s demands while filming her popular comedy series Call Me Kat. However, longtime fans were not pleased that Bialik would be sticking around, with some even threatening to boycott the show entirely.

“Will not be watching Jeopardy! until Ken Jennings becomes the primary and only host,” one person wrote. While another said they would only tune in during Ken’s batch of episodes. Another viewer criticized the show’s decision makers for failing to listen to fans at all. “If you’d listen to the people most of us preferred Ken as the full-time host over Mayim Bialik.” Check out some of the angry fan reactions below.

Jeopardy! tried out several hosts before finally landing on Mayim Bialik and Ken Jennings. But the former was always on the receiving end of negativity from viewers. During a previous episode of the game show, social media erupted with tons of horrible feedback when the actress did a strange impression of Arnold Schwarzenegger while revealing the answer to a question about one of his movies. Following the blunder, folks pleaded with the network to make Ken Jennings the full-time host. “Not only do I miss Ken when he’s not there, but Mayim reminds me daily of how much better he is at the job,” one unhappy fan said via The Sun.

But it’s not just her hosting skills that irk people. Earlier this year, Jeopardy! fans made it their mission to point out that Mayim Bialik repeated an outfit on the show. The 46-year-old addressed the backlash during an appearance on theDrew Barrymore Show, saying that her mother mentioned the outfit before it was anywhere else. And, after telling viewers she is very aware of their discussions on social media, the actress vowed never to wear the orange sweater blazer again.

Meanwhile, Jeopardy! bosses stand by their decision, seemingly oblivious to boycott threats on social media. In addition to naming Mayim Bialik and Ken Jennings as permanent hosts, the show is launching a topical weekly podcast. Hosted by the producers of the game show, Inside Jeopardy! promises to give fans a behind-the-scenes look at America’s favorite quiz show. Topics will cover everything from gameplay analysis, backstage stories, official announcements, and special interviews. The show will be available wherever on Spotify, Apple, or wherever you listen to podcasts. 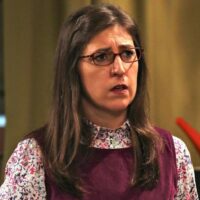