There were more than a few tidbits that came out during the Friends: The Reunion special which aired last month on HBO Max. For fans, there were a bunch of new things learned about the production and how it came about. And apparently, there were things that the cast actually learned as well. Jennifer Aniston has responded to one of those new reveals around what Matthew Perry had to say about his time on the show.

During the reunion special, Matthew Perry let on that he had massive bouts of anxiety while filming Friends, revolving around how funny he would appear during the production. He said that he would “sweat” and “convulse” if he didn’t get the reaction he was going for from the audience. It was clear this caught the rest of the cast off-guard in the moment. Jennifer Aniston later commented to Today about the admission by her fellow castmate.

I didn’t understand the level of anxiety and self-torture (that) was put on Matthew Perry, if he didn’t get that laugh, and the devastation that he felt, which makes a lot of sense.

Lisa Kudrow responded in the moment to Matthew Perry’s admission that he was dealing with an enormous amount of self-pressure when she said, “You didn’t tell us that. I don’t remember you ever saying that.” Jennifer Aniston is mirroring this sentiment that she was confused by this being the case, and even in retrospect is saying something she didn’t get at the time. But she’s also saying that she understands it as well on a base level. Few others would be able to understand the pressure of performing on this big of a stage week-in and week-out, but Aniston is one of them.

It’s easy to forget now, but during its 10-season run on NBC, Friends was a near-weekly television event. The show averaged more than 20 million viewers per episode over its run, an unheard-of number these days, and spiked to 52.5 million with the series finale in May 2004. This kind of pressure to deliver is something Jennifer Aniston surely understands and the surprise was only that it had occurred for Perry, not that it was inconceivable. These people were household names and their weekly antics were the water cooler talk of the era.

In addition to this reveal from Matthew Perry about his anxiety while filming the series, another interesting aspect that came up was Jennifer Aniston and David Schwimmer had a “crush” on each other during the series. This was especially when their characters of Ross and Rachel were romantically involved. It was also not always in the plans for their characters to get back together. There were other interesting tidbits like Monica and Chandler were only supposed to have a one-night stand, and no one, even the writers, ever knew what Chandler’s job was on the show.

As for Jennifer Aniston, these days she’s on another critically-acclaimed series, this time on AppleTv with The Morning Show. Along with Steve Carrell and Reese Witherspoon (among many others), the program details the inner workings of a breakfast talk show. She received a Golden Globe nomination for Best Actress In a Television Series Drama for her role. The series has been picked up for a second season and just wrapped shooting last month. 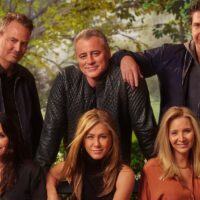