The Sopranos was not just any ordinary mob show. Yes, it had its violence, many times brutal. It had its language, oftentimes rough. But it also had, at its core, a heart that revolved around family. And now, fans of the series get to see how it all began as Michael Gandolfini takes on the role his father, James Gandolfini, made famous.

The Many Saints of Newark is the prequel to the highly acclaimed HBO series The Sopranos that had the late James Gandolfini playing mob boss-in-therapy, Tony Soprano. What makes this movie even more special is the fact that series creator David Chase, who also co-wrote the script for Saints with Lawrence Konner, ultimately chose James’ son Michael to play the younger version of Tony.

To get an idea of just how this story comes together with a peek at young Michael playing a young James Gandolfini, take a look at the excellent trailer.

For those who followed the highly acclaimed HBO series The Sopranos, you may be amazed to hear that it has been 14 years since the series final episode aired. For many, it was must-see TV, as evidenced by the many nominations and awards the series received as well as the critical acclaim it grabbed during its six seasons, including high praise for James Gandolfini as Tony Soprano.

James Gandolfini sadly died in 2013 of a heart attack at the young age of 51 while in Rome with his family. Gandolfini was in Rome, expecting to travel to Sicily a few days later, to receive an award at the Taormina Film Festival. The family spent the day sightseeing in Rome under sweltering heat. Later that evening, it was Michael who found his father unconscious on the bathroom floor around 10 pm that night. Michael called reception, who in turn called the emergency paramedics. They quickly arrived and transported James to the hospital, where he was pronounced dead 20 minutes later.

The notion of returning to the underworld of The Sopranos officially ended when James Gandolfini passed away. Gandolfini was Tony Soprano, the mob boss of the Soprano crime family, in every way, shape, and form. He ran his family with an iron fist, he rarely, if ever, took prisoners, and he relished being on top. Gandolfini chewed up the scenery as Tony Soprano. Thankfully, Chase had an idea for the prequel.

For Michael, who only recently started his acting career, the decision to play his father, James Gandolfini, was daunting. Not only was he stepping into his father’s large shoes, but he had also actually never watched even one episode of the series. “The funny thing is, before the audition, I had never watched a minute of The Sopranos,” Michael said to Esquire. “I was just a kid when he was making it. I would go to the set and ask him what it was about, and he’d say, ‘Oh, it’s about this guy who’s in the mob and kind of goes to therapy.’ The hardest part of this whole process was watching the show for the first time.”

It was a combination of factors that made the whole process a difficult decision for the young actor. “It was an intense process. Because, as an actor, I had to watch this guy who created the role, to look for mannerisms, voice, all those things I would have to echo. But then I’d also be seeing my father. I think what made it so hard was I had to do it alone. I was just sitting alone in my dark apartment, watching my dad all the time.”

In The Many Saints of Newark, the film tells the story of a young Tony Soprano who is a high school student with aspirations to go to college. The movie’s time period is Newark in the ‘60s and ‘70s, using the 1967 city riots as the main backdrop and the tensions between the Italian-American and African-American communities.

The movie boasts a great cast to include Jon Bernthal as “Johnny Boy” Soprano and Vera Farmiga as Livia Soprano, Tony’s parents and the main reason he seeks therapy later on in his life. Also joining the cast are Alessandro Nivola as Dickie Moltisanti, Christopher’s (Michael Imperioli in the series) father, Corey Stoll as Junior Soprano, Billy Magnussen as Paulie “Walnuts” Gualtieri, John Magaro as Silvio Dante, and mobster movie vet Ray Liotta.

At 20-years-old, Michael Gandolfini does not have a ton of experience to pull from like his father James Gandolfini. He made his feature film debut with a bit part in Ocean’s Eight, then grabbed a larger role in the TV series The Deuce. Again, he had bit parts in The Boy, the Dog and the Clown, as well as Youngest and Cherry. The Many Saints of Newark will mark Gandolfini’s first major role in a feature film.

If you can’t wait to jump back into the mobster world of The Sopranos, you’ll be happy to know you won’t have much longer to wait. The Many Saints of Newark is scheduled to be released simultaneously on HBO Max and in the movie theaters on October 1, 2021. 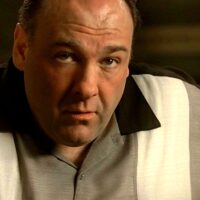