If you can’t get enough of 1994’s Speed, and if you’re nostalgic over the ‘70’s Mother, Jugs, & Speed, then Michael Bay’s latest action film might just be your cup of tea. Ambulance is set to land in movie theatres this coming February, and it bolsters an impressive casting lineup with Jake Gyllenhaal, Yahya Abdul-Mateen II, and Eiza Gonzalez. And while fans of the high-profile “bayhem” director clearly look to his films to deliver on explosive non-stop action, Jake Gyllenhaal is likely hoping the film will highlight the characters just as much as the explosions.

Taking to his official Instagram account yesterday, Jake Gyllenhaal shared a new poster for Ambulance with the caption, “Over this last year, so many talented people came together to make this film, and I can’t wait for you to see it. @AmbulanceTheMovie in theaters February 18, 2022.” The poster focuses on the three main characters of the film, with the landscape of Los Angeles. If you hadn’t guessed yet, it’s the setting for Bay’s newest film. The center of the poster depicts the high-speed chase following an ambulance attempting to outrun the LAPD. The caption for the Jake Gyllenhaal poster reads, “It was supposed to be a simple heist”. See the post below:

Staying true to style, Michael Bay’s latest film is a retelling based on a 2005 Danish movie of the same name. The plot centers around a bank heist gone terribly wrong. In Ambulance, Jake Gyllenhaal plays a fearless career criminal that seems to be quite arrogant when it comes to his special skills. Embarking on the heist of his life, Gyllenhaal teeters on the line of good and bad as he attempts to help his adoptive brother, played by Abdul-Mateen II, pay for his wife’s medical bills. In a turn of events, the brothers end up hijacking an ambulance, holding a cop hostage, and taking a wild ride on a high-speed chase as they attempt to flee Los Angeles.

While much of the world is shocked that a critically acclaimed actor such as Jake Gyllenhall would agree to the role from what many consider a one-trick pony director, it shouldn’t come to anyone as a surprise. As mixed as reviews may be for Michael Bay films, they still have a knack for showcasing elite Hollywood faces. With that being said, Gyllenhaal’s role in Ambulance is definitely a far cry from his most recent role in Netflix’s The Guilty, where he plays a 911 operator that is overly defensive in his pursuit of justice. Similarly, Jake Gyllenhaal is no stranger to action roles. In 2019, he played the supervillain Mysterio, the master of illusion in Spider-Man: Far From Home. Much like his upcoming role in Ambulance, he played Lou Bloom in 2014’s Nightcrawler as a stringer who records violent events late at night in Los Angeles to sell to local television news stations.

As Ambulance gears up for its theatrical release on February 18th, 2022, the overall reactions are quite mixed. Skeptics cry out that it will just be another fast-cutting, overdone action sequence film much like those of his Transformers franchise that was ultimately considered a huge flop. On the other hand, others see potential in the ensemble cast featuring Jake Gyllenhaal with the hopes that the film will reawaken an older form of Michael Bay films. After all, he did gift us with the blockbuster hits Bad Boys and The Rock. While we will have to wait a few more months to see if the high-speed chase flops or not, we are sure of one thing: there will be plenty of explosions. 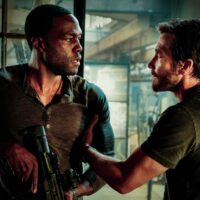