HBO Max has unveiled the first teaser trailer for the highly anticipated Game of Thrones prequel House of the Dragon. The mini video doesn’t reveal too much about the show. But we do get to see a series of images of Targaryen family members, and a voiceover from Matt Smith’s Prince Daemon Targaryen, who says, “Gods, kings, fire, and blood. Dreams didn’t make us kings – dragons did.”

See the House of the Dragon teaser below.

Written by Ryan Condal, House of the Dragon will be based on George R.R. Martin’s Fire & Blood series. Set 300 years before the events of Game of Thrones, the series tells the story of House Targaryen, rich in the dragonlord ancestors of Daenerys. It will focus on the Targaryen civil war that ravaged Westeros and set the stage for the events of the original Game of Thrones series.

Showrunner Ryan Condal is working on House of the Dragon alongside Game of Thrones veteran Miguel Sapochnik, who will be directing the pilot and additional episodes. The series has received a ten-episode order from HBO.

While HBO is trying its best to keep the show spoiler-free, during a recent podcast appearance, creator George R.R. Martin shared some new details about House of the Dragon, which he reveals will live up to its title. Martin stopped by The Stuff Dreams Are Made Of podcast, which is hosted by showrunner of the Game of Thrones prequel series Ryan Condal. In the last six minutes of the in-depth interview, Martin shared what he’s most excited to see in the new show. And not surprisingly, it’s the dragons – all 17 of them!

HBO hasn’t revealed an official release date for House of the Dragon yet. But it’s been tentatively scheduled for a 2022 premiere. In the meantime, you can give Game of Thrones seasons one through eight a re-watch. The entire series is available everywhere movies and series are sold. 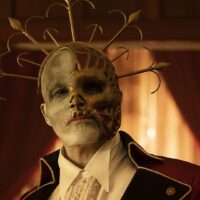