Tobey Maguire and Sam Raimi helped define the modern era of superhero cinema with Spider-Man, a landmark film that became a blockbuster success and spawned two sequels. Some have called Raimi’s trilogy one of the best examples of classic superhero storytelling and yearn for a return to this kind of formalist approach to masked adventurers. With reports that the actor and director would be reteaming for some parts of Doctor Strange in the Multiverse of Madness, fans have been speculating whether or not this could signal a full-fledged return to Spider-Man for the two. Well, it just so happens that Giant Freakin Robot has managed to nab some exclusive information that points towards that exact future.

According to one of our trusted and proven inside sources, Sony wants Tobey Maguire and Sam Raimi to reunite for another Spider-Man movie. The hope is to have Raimi direct a movie starring Maguire that would somehow work as a spinoff from whatever takes place in Doctor Strange in the Multiverse of Madness. Just exactly how much this spinoff would be able to directly reference anything from the Marvel Cinematic Universe is unclear. However, our source says the studio wants this to be a multiverse spinoff so we assume there will be some acknowledgment of the Marvel Cinematic Universe, but there may not be any direct appearances from any of those characters. This project would stand on its own two legs.

Frankly, it would be great to see Tobey Maguire and Sam Raimi make a total return to the Spider-Man saga. Spider-Man 3 was infamously compromised by studio interference and ended up closing out Raimi and Maguire’s time with the character. Sadly, it went out on something of a sour note for most audiences and does not seem to have left a positive impression as the years have gone on. Getting Maguire and Raimi to come back and possibly leave the series on a much higher note seems like a good enough reason to have them come back. If they deliver something really special, it could recontextualize all of the other movies in a really exciting way.

However, we should reiterate that our source is saying that Sony is the entity that is looking towards this potential project. Neither Tobey Maguire nor Sam Raimi has officially signed on or shown a vested interest in the project. But, we don’t know just how things are going along between the two during the production of Doctor Strange in the Multiverse of Madness. They could feel inspired during the shoot and start thinking about taking Sony’s offer. If so, would they also convince Kirsten Dunst to return as Mary Jane? And what other characters could we see make a return?

Whether or not Tobey Maguire and Sam Raimi end up taking Sony’s offer, we are looking forward to seeing their talents back on the big screen again when Doctor Strange in the Multiverse of Madness opens. We do hope that Sony is able to convince Raimi and Maguire to join forces for one last Spider-Man solo movie. We would love to see that series end in a better way.

Tobey Maguire Finally Signed For Spider-Man 3, Details On His Costume 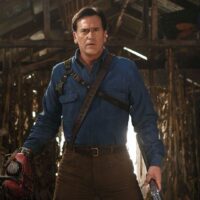 Bruce Campbell Is In Doctor Strange 2, Our Scoop Confirmed