Kit Harington will be making his debut in the Marvel Cinematic Universe with Eternals. In that feature film, he will be playing the character of Dane Whitman a.k.a. the Black Knight. The character is a major player in the history of Marvel and could end up being a massively important character in the future of the Marvel Cinematic Universe. There is no doubt that Marvel Studios cast the former Game of Thrones actor for a significant reason, so we decided to get in touch with one of our insider sources for some information about the character’s future. This source has given us some pretty major and proven scoops in the past, and this one definitely sounds like another big piece of exclusive news.

Our source says that Kit Harington is definitely being positioned to be a key player in the future of the Marvel Cinematic Universe The scoop we got says that the Black Knight is in early development for his own solo project. We were not able to confirm what the project was, but we have to imagine that the obvious option is some sort of series on Disney+. It has become clear that Marvel Studios sees the streaming platform as a way to further expand their characters and build certain storylines. Giving Kit Harington his own series (or miniseries) on Disney+ could flesh out what we end up seeing from his character in Eternals.

However, could Marvel Studios be planning to spend time with the Black Knight in his own feature film? There is no question that Kit Harington has enough star power after his turn as Jon Snow on Game of Thrones to headline a feature film. And if they do plan to make a feature film, it would indicate that Dane Whitman is definitely going to be one of the new central figures of this newest phase of the Marvel Cinematic Universe. If we are not going to get any direct sequels to Eternals, perhaps the plan is to give Black Knight the spotlight and allow other characters from that movie to be involved as well.

Still, if we were going to bet any money on Kit Harington getting his own focal project in the Marvel Cinematic Universe, we would wager it all on a Disney+ series. It would be yet another series that could end up capturing a large audience in the same way that Game of Thrones did during its most popular stages. And it could lead to even more spinoffs from other members of the Eternals cast. We have yet to see just how Disney+ is going to handle their second seasons of these Marvel Cinematic Universe shows, so they could end up being more like sequels than direct second seasons.

Regardless, Kit Harington is undoubtedly about to be an important character in the Marvel Cinematic Universe, and if it turns out that audiences really want to see more of him, this project could be getting the fast track. Exactly what form the project will take is all we will have to wait to find out. 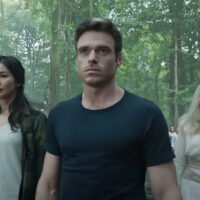