Chris Evans had an amazing run with Marvel. Recently, he signed on for some solo adventures with Knives Out and The Gray Man, but his schedule has more open space than it has in ten years. What will the star want to do now? We’re hearing that Netflix has high hopes for him. A trusted and proven inside source for Giant Freakin Robot has shared that Netflix wants Chris Evans to star in their recently announced BioShock movie.

Currently, it’s unknown what story they are adapting for the BioShock movie. There was a more developed script attached to filmmaker Gore Verbinski previously, but the new movie they’ve been working on for the past year is still being kept tightly under wraps, and since Verbinkski is not believed to be involved, anything could be happening.

The video games take place in multiple locations and with different characters. Like Marvel audiences have seen in recent years, BioShock has its own Multiverse, leaving a lot of room for storytelling possibilities. That kind of thing can be complex though. In the movie, will they make those connections clear for audiences? Or will they stick with trying to tell a simpler story the first time around? Will they be asking Chris Evans to take on a BioShock movie that takes place in an airborne city, or one that’s underwater? The underwater aspect has been difficult in the past for many productions, but most of the games do take place in Rapture.

If they start off with a movie in Columbia, the airborne city, it could mean that they’re looking to cast Chris Evans in a BioShock movie as Booker DeWitt, the main character in BioShock Infinite. The game takes place in 1912. He discovers a woman named Elizabeth trapped in Columbia, and after he rescues her, the two become involved in a complicated war. The game had a story that sounds perfectly fit for a movie and seems like a strong bet, but that’s only speculation.

Previously, Giant Freakin Robot exclusively reported that Netflix was working on the BioShock movie, which has since been confirmed by other outlets. From what we hear, they’re also working on a series, which leads us to believe they’re going to build an entire cinematic universe for the property, much like they’ve done with The Witcher and its spinoff projects. It’ll be interesting to see if they work connections for the movie into the series and start building the Multiverse aspects of the story straight away. That could lead to more appearances for Chris Evans in a BioShock universe in the future. After his many years with Marvel, will that be appealing to him? Or is he looking to keep his schedule more open these days? Hopefully, with the movie officially announced, Netflix will be quickly moving forward with their casting efforts and we’ll hear more soon. 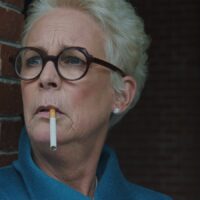