It is widely known that Red Notice, starring Dwayne Johnson, Ryan Reynolds, and Gal Gadot, is Netflix’s costliest investment to date. Reportedly, the production budget of the film was close to $200 million, making it the most expensive film in the streamer’s history. But the film’s director, Rawson Marshall Thurber, has revealed that it had cost a lot more to make the film than what was originally reported.

In a chat with The Hollywood Reporter, Thurber revealed that the production budget for Red Notice was more than $250 million and could be even close to $300 million. This includes the fat fees of at least $20 million that were paid each to Dwayne Johnson, Gal Gadot, and Ryan Reynolds. He explained that the budget went up due to the coronavirus pandemic, which first shut down the production of the film and then amped up up the cost of making it with all the safety protocols that had to be followed.

Thurber further shared that they initially planned to use only 400 visual effect shots in the film. But because of all the COVID-19 guidelines, Red Notice ended up with around 1,500 visual effects as they had to shoot the scenes in “layers, in plates, and stitch those pieces together.” He described a massive masquerade ball sequence in the Netflix film where Dwayne Johnson and Gal Gadot’s characters are dancing together amidst 300 extras. But as the safety protocols didn’t allow such a big crowd at one place, they had to shoot the scene in pieces and then put it all together.

Whatever may be the reasons, is Red Notice’s overpriced budget justified? The Dwayne Johnson starrer hasn’t exactly been a favorite of critics who have panned it for its cliched plotline, bland story treatment, and even called it out for looking “cheap” despite all the big bucks that were invested in its making. But in terms of audience reviews, the film does seem worth its extravagant budget. While the Netflix film has a low score of 35% on Rotten Tomatoes, it is soaring high with a 92% approval rating from the audience.

In fact, the film achieved a massive milestone soon after it debuted on the streamer. With the film’s release on Netflix, Dwayne Johnson took to Instagram to celebrate that Red Notice had the biggest ever opening day for a film in the history of the streamer. He added that the information is based on the data coming from 190 territories where the film was streamed. And given the rate at which the film is continuing its reign on the streamer, it seems like Red Notice will soon be dethroning the 2018 Sandra Bullock thriller Bird Box as the most-watched title on the streamer.

Red Notice saw Dwayne Johnson as Special Agent John Hartley who is after the most wanted art thief Nolan Booth (Ryan Reynolds). The latter is planning to carry out the biggest heist of his life. While he manages to nab Booth, Hartley is double-crossed by Gal Gadot’s Bishop, another elite art thief who can outsmart anyone. Dwayne Johnson and Ryan Reynolds then team up to thwart her plans. After the Netflix action-comedy, the next multimillion project Johnson will be seen in is Warner Bros.’ Black Adam where the actor will bring the titular anti-hero to life on the silver screen. 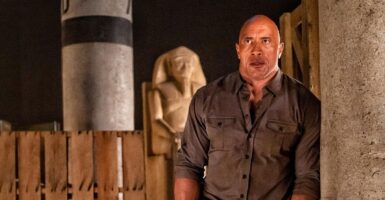