Two Underrated DC Heroes Are Getting Their Own Movie

Warner Bros is really pulling out the stops on their plans for DC Comics adaptations. Two notorious superhero characters from the 1970s are getting a live action DC feature: The Wonder Twins. The feature is set to be written and directed by Adam Sztykiel, who co-wrote the upcoming Black Adam film starring Dwayne Johnson as the titular mystically powered anti-hero. Sztykiel had previously worked with Johnson on 2018’s Rampage, a movie that grossed nearly half a billion dollars on the premise of teaming up The Rock with a giant albino gorilla. It will have to remain to be seen whether The Wonder Twins might have the same appeal to audiences, but given that they will at least have the power of the Warner Bros juggernaut behind them, it is worth a shot.

The Wonder Twins may not seem like an obvious choice for an HBO Max project, but Warner Bros has been drawing deeply from their well of DC intellectual property. 2022 has an enormous slew of DCEU projects coming out, like the aforementioned Black Adam, as well as the long delayed The Flash solo film starring Ezra Miller and Michael Keaton, as well as reuniting James Wan and Jason Momoa for Aquaman and the Lost Kingdom. But while those are the heavy hitters, Warner Bros is utilizing lesser-known characters like the Bat-related villain Firefly (to be played by a resurgent Brendan Fraser) for the HBO Max film Batgirl, and there are near constant rumors of semi-obscure characters like Zatanna being pulled out of drydock for adaptation. Truly, it is a good time to be a little-known, tertiary DC Comics character.

Granted, The Wonder Twins are not so much “little-known” as “widely mocked.” Originating on The All-New Super Friends Hour cartoon in the 1970s, the duo are a brother and sister named Zan and Jayna. Much like Superman, they are alien beings who protect the Earth with their otherworldly powers. Unlike Superman, their powers are kind of not awesome. Well, at least Zan’s; while Jayna can transform into any animal, Zan can only transform into water. But at least, it’s any kind of water! They also have a pet monkey named Gleek, because just like Dwayne Johnson with Rampage, the possibilities of pairing a superhero with a wacky simian are endless. The Wonder Twins have appeared frequently throughout DC Comics continuity, though their popularity has rivaled that of, say, Spider-Man or most other superheroes. Part of that may simply be their dated look, as the two were reportedly modeled after Donnie and Marie Osmond, who also didn’t make it out of the 1970s with their dignity entirely intact.

Details on The Wonder Twins project are still scarce, but it is a promising step up for ​​Adam Sztykiel to graduate to DCEU director. After all, Warner Bros has already burned through their attempt at challenging the dominance of the MCU with Zack Snyder, and while things are going well with James Gunn, they can’t rely on him forever. It seems likely that lesser known properties like The Wonder Twins will be a proving ground for their next generation of filmmakers, and at least they gave him something interesting to work with. 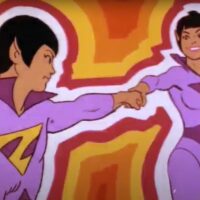