Arnold Schwarzenegger has been in the entertainment industry for a very long time. He made his on-screen debut playing the titular character in 1970’s Hercules in New York. Since then he’s starred in films like Conan the Barbarian, The Terminator, Commando, Predator, Kindergarten Cop, Total Recall, True Lies, and more. So it makes total sense for him to share his knowledge of the movie business with his kids.

Arnold Schwarzenegger has five children, some of whom have followed in their father’s footsteps. Recently, his son Joseph Baena spoke with The Unwaxed Podcast and talked about the best advice he got from his dad regarding his foray into acting. The 24-year-old has been getting a lot of roles lately and his dad has been very supportive of his career.

“My dad gives me like the most, not generic because it’s like really good advice, but it’s like, ‘Aw, I feel I already knew that.’ Like with acting and stuff, it’s always about the reps. Just practicing, until you can just say it. Everyone always comes to me like, ‘How do you learn all these lines?’ I’m like, ‘Well it’s through the reps and it’s what my dad told me.’”

“Once you’re able to say these lines while washing dishes, doing your laundry, someone trying to interrupt you, then you can say them whenever. When the camera is going and you’re saying these lines you have the boomstick in your face, the cameras, moving around, maybe your scene partner misses a line or something and you have to improv real quick, a car is passing by, so they have to cut it right there. You just have to roll with it.”

Like any profession, acting requires studying and a lot of practice to master the craft. Since Baena is just starting out, Arnold Schwarzenegger’s advice will serve him well in future endeavors. The young actor currently has multiple projects in the works. This includes Chariot which stars John Malkovich, Shane West, Rosa Salazar, and Scout Taylor-Compton. Arnold Schwarzenegger’s son will be featured in Bully High with Betsy Russell and Taylor Jabara – and Encounters with Madison McKinley and Sade Katarina.

Arnold Schwarzenegger’s wise words prove just how close he is with his son. Baena is the child from an affair the Terminator star had with the family housekeeper while married to Maria Shriver. Mildred Patricia Baena worked for the Schwarzenegger’s for almost 20 years before retiring in 2011. She told the LA Times that she received a severance payment and left on good terms. The action star reportedly found out about Joseph when he was 8-years-old and started to look like him. His wife, Maria, was suspicious about the child and confronted her husband during a couple’s therapy session. They finalized their divorce in 2021, ten years after separating.

Meanwhile, Arnold Schwarzenegger is moving along with his own acting career. The 74-year-old plays the President in the upcoming martial arts comedy Kung Fury 2. Directed by David Sandberg, the film serves as a sequel to the 2015 featurette Kung Fury. Michael Fassbender, Alexandra Shipp, Ralf Moeller, and Jorma Taccone also star. The movie is scheduled to be released later this year.

Set in 1985 Miami, the story follows Kung Fury and his Thundercops who keep the city and its President (Arnold Schwarzenegger) safe from the evil Kung Führer. After a tragic event forces the group to disband, a mysterious villain emerges from the shadows to aid in the Führer’s quest to attain the ultimate weapon. Now, Kung Fury must travel through space and time to save his friends.

Arnold Schwarzenegger will also lend his voice to the lead character in the new cartoon series Superhero Kindergarten. Inspired by 1990’s Kindergarten Cop, the role Schwarzenegger refers to as his favorite, the actor had created the series with Stan Lee before the Marvel legend’s death. It premiered on the Kartoon Channel streaming service in 2021. 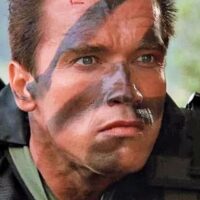