Hugh Grant might have pulled off the prank of the century, as he coompletely and hilarously made fun of the British government during Boris Johnson's speech.

If you missed the news, the Prime Minister of the UK Boris Johnson recently resigned from his position. Actor Hugh Grant decided to incite a little mischief at the proceedings by encouraging protestor and activist Steve Bray to blast the Benny Hill theme outside Parliament when Johnson announced his resignation. Bray obliged, and now you can hear the Benny Hill Theme scoring the background of several news reports on the resignation.

Hugh Grant’s choice was perfect, as the Benny Hill theme has no lyrics or anything to distract from the speech itself. Just a silly, goofy melody that has also been referred to as “Yakety Sax.” The Benny Hill Show was a show in the 1950s that aired on BBC and featured comedian Benny Hill in a variety of slapstick sketches. Obviously, you can guess that Hugh Grant and Bray didn’t think too much of Johnson if this is the silly theme, they chose to prank the resignation speech with.

If you’re curious as to why Hugh Grant and Bray needed to collab on this prank in the first place, Boris Johnson is officially stepping down as the Prime Minister of the UK. This announcement was preceded by dozens of members of Johnson’s government resigning first, including several cabinet members. These resignations came in the wake of a series of scandals, with the scandal involving former government minister Chris Pincher seeming to be the final nail in the coffin. Pincher stepped down from his position after he was accused of groping two men, and Johnson denied knowledge of previous accusations. However, Johnson changed his story twice as more news came out, leading him to be accused of lying. Other straws that contributed to breaking the camel’s back included Johnson almost getting voted out with a no-confidence vote and various fines for violating COVID-19 policies. Clearly, the mounting scandals against Johnson made the Benny Hill theme seem like the natural choice for a government official resigning in disgrace.

When Hugh Grant isn’t contributing to pranks against his government officials, he’s probably filming his upcoming projects. He has quite a few on his plate, with one of the most baffling being a film called Unfrosted. Unfrosted tells the story of Kellogg’s and Post competing to create the next big breakfast item in 1963. Yes, this is a Pop-Tart origin story. Adding to the weirdness of this project is the fact that Jerry Seinfeld is directing. Seinfeld will also be starring in the project along with Grant, Melissa McCarthy, James Marsden, Rachael Harris, Amy Schumer, Max Greenfield, Jack McBrayer, and more. With Seinfeld directing and a cast full of comedians, it’ll be interesting to see this comedic origin story come to life.

Hugh Grant also has the upcoming Dungeons & Dragons movie on the docket and a TV series announced called Kaos. Dungeons & Dragons is shrouded in mystery right now for plot details, but it’s directed and written by John Francis Daley and Jonathan Goldstein. Kaos is set to be a modern retelling of Greek mythology, with Grant set to play Zeus. 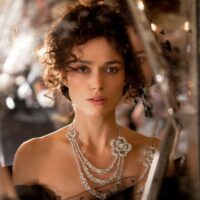