Ellen Page has announced that they are transgender and non-binary, now going by the name Elliot Page. The Oscar-nominated actor made the announcement via their Instagram account.

Elliot Page (formerly Ellen Page) has been a vocal supporter of LGBTQ+ rights throughout his career. He came out as gay during a speech at the Human Rights Campaign’s “Time to Thrive” conference in Las Vegas. Page has continued to be adamant about equal rights for LGBTQ+ citizens around the globe. GLAAD celebrated Elliot Page coming out with this statement on their official Twitter account:

Elliot Page (formerly Ellen Page) has seen an incredible outpouring of support on social media since announcing they are transgender and non-binary. Noted pop culture figures like Kumail Nanjiani celebrated the news on Twitter:

As Ellen Page, Elliot Page racked up quite the impressive credits list. He first hit the scene in America in the taut thriller Hard Candy. He would then go on to play Kitty Pryde a.k.a. Shadowcat in X-Men: The Last Stand and would return to the role in X-Men: Days of Future Past. However, it was the role of Juno MacGuff in Juno that catapulted Page into stardom. It garnered an Academy Award nomination and put Page on the map.

That would lead Elliot Page (formerly Ellen Page) to other excellent roles such as Libby in 2010’s Super, written and directed by Guardians of the Galaxy director James Gunn. Page would also end up working with Christopher Nolan on Inception, playing the part of dream architect Ariadne. He also worked with Drew Barrymore when she made her directorial debut, Whip It, an adaptation of a novel about a roller derby league. Page has also directed, but chose a documentary instead of fiction for their debut. The film was There’s Something in the Water and focused on the plight of “Indigenous and African Nova Scotian women fighting to protect their communities, their land, and their futures.”

Recently, Elliot Page (formerly Ellen Page) has found success on the Netflix series The Umbrella Academy, an adaptation of the sci-fi/superhero comic book by Gerard Way. The series was recently renewed for a third season, and it looks like Page will be back as key character Vanya Hargreeves. There are two other acting projects listed on Page’s IMDb profile but they both appear to be voice acting roles in animated films. It is going to be exciting to see what project Page chooses next now that he has identified as transgender and non-binary. Will it be as Vanya in The Umbrella Academy?

We want to congratulate Elliot Page for their coming out and wish them nothing but the best in their future endeavors. The world can be a very scary place, especially in 2020. To do something like this takes courage and resolve. We cannot wait to see what Elliot Page’s career will look like moving forward. Goodbye, Ellen Page, and hello, Elliot! 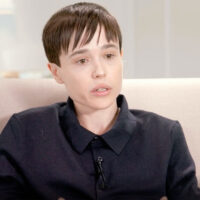