Edward Furlong: How Starring In T2 Led To A Horrible Fate

For Edward Furlong, his is a story that has been told before and undoubtedly it will be told again. It goes something like this. Young Hollywood star makes it big. Life, fame, and fortune are too much to handle. Drinking and drugs enter the picture. That star comes crashing down. From there it turns into a redemption story or the downward spiral continues. For Furlong, thankfully, he may still have pen in hand.

It’s tough for any young actor when their first gig right out of the shoot is a big one. Actually, big doesn’t come close to describing it. Mammoth? A behemoth? However you chose to describe the movie, James Cameron’s 1991 science-fiction blockbuster Terminator 2: Judgement Day is considered, by far and by many, the best movie in the Terminator franchise. It solidified Arnold Schwarzenegger as an action star and gave name to a first-time actor, Edward Furlong, as he grabbed the all-too-important role of John Conner. Except, he almost wasn’t.

It was revealed in the documentary, T2: Reprogramming the Terminator, that Cameron wasn’t thrilled with Furlong’s audition and almost took Edward off his list of candidates. But to get Edward Furlong to audition in the first place, T2 casting director Mali Finn went a bit unorthodox to find him.

Per Cameron via Entertainment Weekly, “Eddie was found by Mali Finn,” says Cameron. “He didn’t come in through an agency, he’d never been in anything, she literally just went out to find raw untried talent.”

Furlong confirms the how’s. “I was in a place called the Pasadena Boys Club,” Furlong recalls. “She says, ‘Can I have you come and audition for a movie? I can’t tell you what it is, but take my number down, and call me.’ The first time I auditioned I had no script, because I was just supposed to be yelling at Mali, because she was like, my mom… Second audition, not so good. [James Cameron] told me, like, I didn’t do so well on that… She came over to my house and she said, ‘Jim almost wrote you off the list, but you’re gonna get another chance.’ And I took it very seriously and I just went balls to the wall. After I did my last audition, Jim, he was like, ‘Don’t tell anybody this, but you got the movie’ — and that was awesome.”

And the rest, as they say, was history.

THE BEGINNING OF THE END

It isn’t quite fair to Edward Furlong to say T2 was the beginning of the end for him, well, because things in terms of acting haven’t quite ended for him. Through all his trials and tribulations and drugs and alcohol-fueled frenzy, Furlong has maintained a consistent level of work. By level, we mean he has found work consistently.

The ‘90s were a good decade for Edward Furlong. After his gigantic first role in T2, he went on to star in Pet Sematary II, A Home of Our Own, Brainscan, Little Odessa, Before and After, as well as hits such as American History X, Pecker, and Detroit Rock City.

In front of the camera, Edward Furlong seemed to have it all working, but behind the scenes, things were completely different. In 1992, he was a 15-year old actor who started a relationship with his former tutor, the 28-year old Jacqueline Domac. It was a relationship that would cause many headlines as first, Furlong was a minor.

In 1994, California changed its statutory rape laws, meaning Domac could possibly be charged. In fact, Sean Furlong, Edward’s uncle, unsuccessfully attempted to sue Domac for just that. Edward Furlong and Domac’s relationship then began to get testy with Domac eventually suing Edward for domestic violence.

According to the charges, via the New York Post, Domac “was subjected to a barrage of verbal abuse, threats, violent outbursts [and] outrageous and unlawful attacks.” The charges also claimed that “Furlong pinned Ms. Domac down on the bed and began using his fists to strike her in and about the head.” Sadly, this wouldn’t be the first time Furlong would be accused of domestic violence.

THE MIDDLE OF THE END

Edward Furlong’s movie career somehow continued. The decade of the 2000s saw him in many feature films. They included: 3 Blind Mice, The Crow: Wicked Prayer, Venice Underground, Jimmy and Judy, High Hopes, Warriors of Terra, Dark Reel, and Night of the Demons. In 2006, Furlong also starred in his first TV series with a recurring role on CSI: NY.

While the 2000s continued to be good to Furlong in front of the camera, behind it they were just as tumultuous. Edward Furlong married actress Rachael Bella in 2006 and the pair welcomed a baby boy in September of that same year. By this time, though, alcohol and drugs were fueling Furlong and it showed throughout the couple’s three-year marriage.

When Bella filed for divorce, she claimed that their baby tested positive for cocaine when he was born, which prompted the judge to allow Edward Furlong only supervised visits with his son. Things got so bad for Bella after the divorce that she had to file a restraining order against Furlong.

In her court document on the restraining order, Bella alleged, via The Hollywood Reporter, that Furlong “grabbed me, bruised me, pushed me … left messages saying he would hire people to come and beat me with chains and bats. He is smoking cocaine and doing other various drugs. He is very unpredictable.”

RISE OF THE MACHINES, FALL OF FURLONG

Before things went south between Furlong and Bella, Edward Furlong had a chance. This chance was a return to glory when it was announced that a third Terminator film was being made. This was in 2003 when Terminator 3: Rise of the Machines premiered.

According to Edward Furlong, he had a contract to return as John Connor. He also had that contract taken away. He opened up as to why he lost it and the part was given to Nick Stahl. “Essentially, I overdosed on drugs. I had a contract. And that always really bummed me out,” Furlong admitted.

He told an audience, via Forbes, during Chicago’s Day of the Dead convention, “I have never even seen the other ones after that,” referring to the Terminator movies following his T2 role. “But John Connor is what changed my life. I had never done anything before that. And I’ve been making a living because of that,” Furlong continued. “So it’s a very close thing to me and it was a little bittersweet doing it. That’s my role. To get it back in the long run was good.” The “get it back” comment is in reference to his Terminator: Dark Fate appearance.

The words from Edward Furlong’s mouth at the Day of the Dead conference were more a cautionary tale. “It was literally overnight success. It was insane. I’m still coming to grips with the shock and awe of it all… I got into things that weren’t good for me – for a long time. I was a kid who had a lot happening all at once. And I wasn’t really able to process it,” said Furlong. “Early career, I remember it was crazy to me. It’s insane for a little kid to get that much power. Especially if you don’t really have any parents.”

It all caught up to the actor in 2013 when he was again arrested, this time for violating Bella’s restraining order. He was sentenced to six months in jail, time which he served.

Given all that Edward Furlong has put himself through, the one thing he can say is that he never really has been gone. Frankly, it’s surprising he has survived this long both in Hollywood and in life, but somehow, he has.

The beginning of the past decade saw Furlong complete many features that included For the Love of Money, Crave, Paranormal Abduction, Assault on Wall Street, Stitch, A Winter Rose, The Last Light, and Awaken. He was also seen on the TV series Star Trek: Renegades.

Edward Furlong wasn’t quite done with making a name for himself. The former John Connor was back in action as, well, John Connor in the 2019 hit Terminator: Dark Fate.

He explained, via Forbes, his minor role and the difficulty he had, technically speaking. “Honestly, it was so weird. They were telling me, ‘We need you to come in and we want you to play 14-year-old you.’ And all I could think about was that movie with Bette Davis – Whatever Happened to Baby Jane? I kept thinking of that movie.”

The actor was talking about the de-aging effects needed to give him the look of a 14-year old. “I wasn’t with Linda [Hamilton]. Tim Miller was there. They had a monitor and I was acting off the image on the monitor. It’s very, very technical. And you have to be very precise. There were only certain ways I could move. Because I had to match the body double,” explained Furlong of the process of watching a scene that had already been shot with a double, then reacting to it himself, while portraying the young John Connor character. “It was weird. We had dialogue and stuff originally like that at the table but it was a trip. I’m not used to doing that.”

So, how does Edward Furlong’s story end? Is it a tale of redemption or a tale of tragic endings? It’s obvious Furlong continues to battle his demons but it is a struggle he seems prepared to continue. Maybe redemption is in his cards. 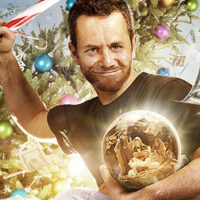 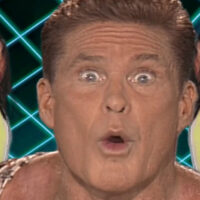 You Could Own A Giant David Hasselhoff