Arnold Schwarzenegger is one of the most accomplished and storied actors of his time. The Austrian-American continues to be going strong at 73, and it looks like he is going to be headed to television in a brand new adventure series. Joining him for this project will be a young up-and-coming actress that will play his daughter.

Monica Barbaro will be starring alongside Arnold Schwarzenegger in the upcoming series, which is described as a global spy adventure series. Barbaro has been making her presence known on television for the past few years. She has had significant roles in shows like UnREAL, Chicago Justice, and The Good Cop. However, she has yet to have a breakout film performance. That could change next year when Top Gun: Maverick hits theaters. Barbaro will play “Phoenix”, one of the new pilot trainees in the action movie sequel.

According to Deadline, Barbaro was approached for this new series with Arnold Schwarzenegger after she had finished filming on Top Gun: Maverick. The show will be created by Nick Santora, who has had plenty of experience in television as a writer and producer on shows like Prison Break, Law & Order, and Scorpion. He is also one of the credited writers on Punisher: War Zone, one of the absolute best Marvel movie adaptations ever made.

It is unclear at this moment exactly what the story will be surrounding the characters played by Arnold Schwarzenegger and Monica Barbaro. The series is being developed by Skydance Television. The assumption is that this new series could be slated to be part of Paramount+, the rebranded name for CBS All-Access. Having a superstar like Arnold Schwarzenegger in your show could definitely be a selling point for consumers who might not be interested in the streaming service at this point.

It could also act as another great way to get Monica Barbaro on audiences’ radar. The young actress is at the point in her career where she is just one role away from really breaking out and becoming a star. Taking this role alongside Arnold Schwarzenegger could be a fantastic way for her to step into her own as a leading lady. That will all depend on how successful this upcoming series will be.

Otherwise, we don’t have a whole lot else to report about this new project. It is exciting to see Arnold Schwarzenegger make the jump to modern television. The medium has become an outlet for a lot of content that feature films just aren’t as interested in tackling anymore. An actor of Schwarzenegger’s caliber could bring some real verve to a project like this. Plus, for anyone who is an Arnie fan, the prospect of getting multiple episodic adventures with him sounds like an absolute joy.

Once we hear anything more about this project, we will be sure to keep you updated. We are excited at another new project from Arnold Schwarzenegger, and we are doubly excited to see Monica Barbaro edge even closer to the spotlight she so rightly deserves. 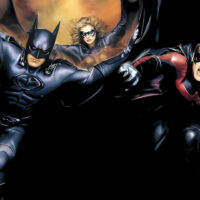