The Johnny Depp defamation trial against his ex-wife Amber Heard has already been a wild ride. There has been a ton of personal details thrown out in the past six weeks that haven’t quite painted either of them in the greatest of light. However, the running consensus is that Heard has been lying about her being abused sexually and emotionally at the hands of Depp. At least that is what the actor’s legal team has tried to claim in court. There have been plenty of times in which Heard was found to be lying, and now it seems the jurors have found another hole in her side of things. They have been deliberating for 10 hours and have asked for clarification about only one issue, and that is from Heard’s claims. The issue has to do with the title of her op-ed, which is essentially what started this entire lawsuit.

The jury asked Judge Penney Azcarate about how they should weigh the headline of the op-ed that Amber Heard wrote. The headline reads, “I Spoke Up Against Sexual Violence — And Faced Our Culture’s Wrath. That Has To Change.” However, the confusion from the jury comes in form of how this headline should be looked at. They have questioned if the defamatory remarks came from the headline, or from the content of the op-ed. Judge Azcarate has instructed the jury to think of the headline as a statement that must be looked at as defamatory. The headline is one of three defamatory statements that are going to be looked at should the jury side with Johnny Depp. The other two are, “Then two years ago, I became a public figure representing domestic abuse, and I felt the full force of our culture’s wrath for women who speak out,” and “I had the vantage point of seeing, in real time, how institutions protect men accused of abuse.”

Amber Heard has claimed plenty of times that she had not named Johnny Depp as her abuser in the headline or in the body of the op-ed piece. Based on that, her piece should have never been seen as defamatory, which is the basis of Depp’s entire case. However, her legal counsel has claimed that the public knew who she meant, and they took it a step further by claiming that she had been sexually abused in 2016, which now supports the headline of the piece. Heard’s legal team also claimed that she couldn’t be held accountable for the title of the piece, as an editor wrote it. However, Depp’s legal team also pointed out that she tweeted the article without disputing the headline at all.

While this may sound a bit confusing, what it boils down to is the jury finding and supporting the idea that Amber Heard has been fabricating these stories of abuse to the courtroom. She claimed that she had to use a makeup kit to cover her bruises, but that makeup kit hadn’t come out when that abuse took place. She claimed that she was abused in the same way Kate Moss was pushed down the stairs by Johnny Depp. Moss appeared in court to dispute that claim completely. She has also stated that her piece never outright named Johnny Depp, but that is no longer the issue as her legal counsel has claimed that the abuse was always about him. The jury continues to deliberate, but right now, things are not looking good for Heard. 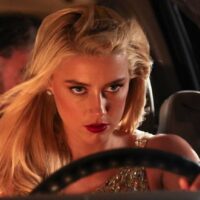