Star Wars 7: Chewbacca, R2-D2, And More Have This Special Message For Fans

We’re now officially less than one year away from finally seeing Star Wars: The Force Awakens. Hell, by December 19, 2015, some of us will already have seen it three four times, maybe more. Earlier this year, J.J. Abrams, Lucasfilm, and Disney capitalized on this massive fan interest and channeled it for good. Their “Force for Change” campaign raised millions of dollars to help at risk children around the world, and Abrams, the crew, and a couple of notable franchise stars, want to say thank you.

The earlier “Force for Change” videos offered fans our earliest official looks at the new film, with a special emphasis on the practical effects side of production. We got our first peek at that Jim Henson-esque character, and saw Abrams hanging out in front of a new X-Wing Fighter. While this video doesn’t have any cool reveals like those, both Chewbacca and R2-D2 stop by, or in R2’s case roll by, in order to thank everyone for helping out.

Here’s the first video, that appeared back in May as production got going in Abu Dhabi…

…and the second, which appeared in July.

In the end, “Force for Change” raised more than four million dollars to help fund UNICEF’s network of Innovation Labs, which seek to find sustainable solutions for problems facing children across the globe, with an emphasis on education, health, water, and nutrition. These funds specifically will be used for projects like Rapid FTR (Family Tracing and Reunification), which is a mobile phone app designed to bring together families that have been separated from their children in the event of a natural disaster. There’s also the MobiStation, a portable, solar-powered kit, a kind of mobile classroom that ensures children anywhere have access to education.

We’re gradually learning more and more about Star Wars: The Force Awakens, like the names of a few of the new additions to the franchise, and Andy Serkis recently shed some light on his role, not roles, in the film. We are talking about J.J. Abrams, a filmmaker who is notorious for keeping details under wraps, and when you combine that with both Disney and Lucasfilm, we don’t really expect to know much of anything before we sit down in that theater less than a year from today. And that’s probably for the best, we didn’t know every last plot point before we watched the original trilogy, so why not let ourselves be surprised again. 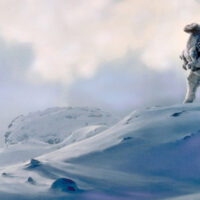 The Next Star Wars Movie: Brie Larson Eyed To Play A Beloved Jedi