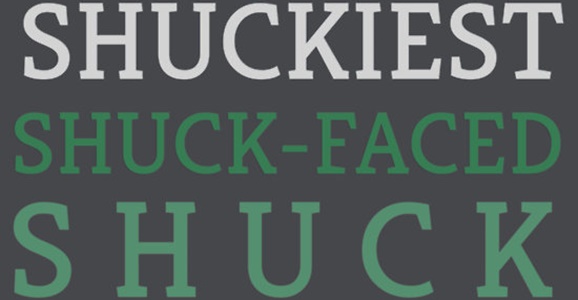 The Maze Runner
James Dashner’s 2007 YA novel The Maze Runner was a surprisingly fun read, dropping readers into a post-apocalyptic tale that was far more engaging to me than anything involving a Katniss or a…Divergent character. A group of teenaged boys comprise a makeshift society at the center of a massive maze, filled with dangerous creatures. These boys don’t have their memories intact, which means the conversations never turn to romantic lust or anything of that sort. Even without rock-solid memory banks, it’s like they inherently know that swearing is awesome. And it’s nearly impossible to rail against a Greenie or run away from a Griever without having something stronger than “Oh no!” to scream, so the Glade’s in habitants came up with their own foul language.

Profanity Effectiveness Rating: There’s not a shucking thing wrong with either of the first two words, as they roll off of the tongue pretty easily. Slinthead, however, doesn’t really do it for me. Slint, regardless of how you feel about the band of the same name, is just a wrong-sounding word, like “moist.” 9 out of 10.