Everybody loves Legos. But while I certainly enjoyed snapping the little colored blocks into whatever shapes my hyperactive imagination could come up with as a kid, I was always the sort that preferred bringing home the Space and Castle sets home and building them precisely…as…instructed. I think my short attention span when it came to making my own Lego creations is partially why I’m so fascinated by the Lego Cuusoo community, where average joes and janes come up with new Lego concepts, and if those concepts get enough votes, they could become official Lego sets. And I kind of love this (potential) set based on Steven Spielberg’s E.T. the Extra-Terrestrial. Cuusoo user tjspencer1 designed the 575-piece “E.T. Return Home” set. The key to any tie-in Lego set is to figure out which characters, settings, and other elements are the most recognizable parts of a given film or show or whatever. The E.T. set would include five figurines: E.T., Elliot (Henry Thomas), Gertie (Drew Barrymore), Michael (Robert McNaughton), and a “Medical Unit Officer.” (That’d be the creepy science dudes in the biohazard suit who come in to ruin E.T. and Elliot’s good time.) You’d also get several handy-dandy accessories: Elliot’s moon-eclipsing BMX bike, a Speak ‘n’ Spell, the cobbled-together communication’s gizmo E.T. used to “phone home,” Gertie’s red wagon, and — of course — a tiny Lego bag of Reeses Pieces. Of course, you’ve got to have someplace to put all those nifty figures. The E.T. set has, naturally, Elliot’s house (complete with a closet for when E.T. needs to go incognito), the garden shed out back where E.T. was hiding, and the Evil Scientists’ van and “Mobile Cryo chamber.” Because you don’t want your extra-terrestrials spoiling while you’re trying to get them back to Area 51. I can totally see buying one of these sets once my kids are old enough to introduce to Spielberg’s classic family film. My only complaint is that there isn’t a big-ass Lego moon for Elliot and E.T. to bike across. Or, you know, E.T.’s mothership that actually takes him home. That’d be a separate set, no doubt… 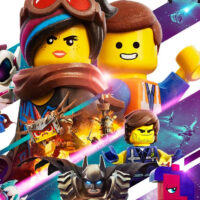 The LEGO Movie 3: A Franchise In Trouble