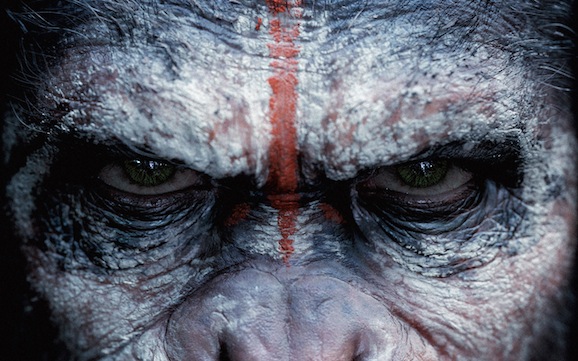 Brent: From the very first time you see the apes, that extreme close up of Caesar’s eyes, you can’t help but marvel at them. They’re the heart of the movie aesthetically, but also from character and thematic perspectives.

Nick: Not for a single second did I ever disbelieve that I was watching a bunch of genetically modified apes creating their own society. Knowing that this will soon be their planet, we as an audience don’t necessarily need to decide whether we’re rooting for the humans or for the apes. We just have to decide whether or not this story has justified their superiority, and it’s abundantly clear, even if it’s spelled out through subtitles and simplistic ape language.

I hate that it came down to “that one asshole” who ruined a good thing for everyone, but for me, that allowed us to watch the ape community react to conspiracy, treachery, and betrayal, very human traits that they hadn’t had to deal with before. That doesn’t happen in movies often.

Nick: I needed the special effects to be good to overshadow the story, and it worked all the way. Whatever my issues with the story, it’s a gorgeous film that was made for the big screen. I never go 3D, is it worth it?

Brent: I don’t think it’s 100% necessary, but Reeves actually uses the technology very well, and I’m not a 3D fan, it’s completely overused and usually adds nothing to a movie. In Dawn, however, there’s a nice depth of field that just brings another layer of immersion to this world. Especially during action scenes like that first scene, where the apes are hunting in the redwoods. The way it’s filmed as the apes swing from branch, and the way Reeves moves the camera when them as they move, it places you right there and makes you feel like you’re right with them, along for the proverbial ride.

My guess is that comes across in any format, but the 3D does accentuate it.

Nick: I believe that. The movie never loses that sense of depth, but everything involving the ape community is just so awe-inspiring.

The shot with the camera on the tank was right up there with the Joker hanging out of the car window, in terms of detached moments of horrific beauty.

Brent: I love that scene where the humans look out and see the apes surrounding their settlement for the first time. That image is absolutely harrowing.