Snake sightings seem to only be increasing these days with the reptiles being spotted in all kinds of crazy places. But even with all of these chance encounters, rarely do we get footage of an actual venomous bite happening in real-time. That was the case recently with a YouTuber documenting the moment he was bit by a copperhead snake while on hiking on a trail doing a little snake-spotting.

The video was captured by YouTuber DoubleO who is actually a snake enthusiast. He was on the hunt for different snakes in the area in a local Baltimore County Park. He gives a brief intro to the situation and even makes a case for why people shouldn’t be scared about encountering a snake in the wild. This was done prior to showing what happened when he happened across the copperhead. Check out DoubleO’s video here:

As part of his Obsession Outdoors channel, the gentleman is hiking along a wide path clearly on the lookout for snakes for part of his channel. He laments missing out on capturing a couple of snakes here and there and then decides to keep the camera on for good. It’s then he jumps up after feeling something on his leg. Because he’s an expert on snakes, the dude realizes right away what has happened: he’s been bit by a copperhead snake that he just stepped on. Sure, he was on the hunt to find a snake or two. But this was much more than he bargained for.

Amazingly, and because he has experience in this field, DoubleO immediately signals a nearby hiker to call the park ranger for assistance. While clearly understanding the seriousness of the situation, muttering, “Not good, not good” a number of times, he also is empathetic to the snake as well, wanting to make sure it wasn’t harmed. Rangers appear on the scene who are surprised that a copperhead was even in the area. According to everyone involved, copperheads simply aren’t ever seen in this area.

When he’s being taken to seek medical treatment, DoubleO mentions that this copperhead snake might have given him a dry bite. In this case, the snake didn’t release enough venom into the victim to have the latter need significant medical attention. In this way, he’s lucky. Copperhead bites, while typically not fatal, can cause significant pain. According to the most recent data, there are between 7.000 and 8,000 copperhead snake bits a year in the United States.

Later, at the hospital, they were able to confirm that it was in fact a dry bite because there hadn’t been an increase in pain at the site of the bit. He said in the end the bite simply felt like “thorns” quickly digging into his leg. In all, this situation could have been much worse. Considering the copperhead snake was simply hanging out on the path, any hiker coming by could have stepped on it. That a snake expert was the victim helped the situation remain calm. And because it was a dry bite, the overall effects were very mild. 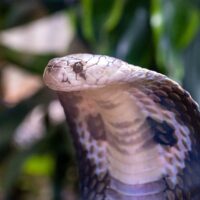