Eight years have passed since the release of 2014’s Mario Kart 8, and truth be told, the game was a massive success for Nintendo. Not only did it sell in tens of millions of copies, but it also led to the release of Mario Kart 8 Deluxe — an enhanced version of the game for Nintendo Switch, which also sold in tens of millions of copies. Admittedly, the release of Nintendo Switch has greatly extended the game’s life cycle and boosted the cumulative sales numbers to over 75 million copies, but the game is still going strong. Regardless, eight years have passed, and now it’s time for a fresh installment in the franchise; the first details regarding Mario Kart 9 have been leaked.

According to Leaky Pandy, a known leaker group, the next Mario Kart game will feature more than just Mario characters. However, as per Comic Book’s report, the Leaky Pandy referred to the game as Mario Kart 10, considering that some rumors, albeit unconfirmed, claim that Nintendo views Mario Kart Home: Live Circuits as Mario Kart 9. For all intents and purposes of this article, we’ll simply refer to the game as Mario Kart 9 since Nintendo didn’t confirm previously mentioned rumors. Regardless of the name, the upcoming game will feature characters from other Nintendo gaming series, like Animal Crossing, F-Zero, Kid Icarus, Splatoon, and The Legend of Zelda. Additionally, some non-Nintendo characters might also make an appearance, though this is only limited to Ubisoft’s Rabbids.

With that said, the crossover characters aren’t the only thing coming to Mario Kart 9; the game will also include unique courses from games represented by crossover characters, and some unique items might also appear in the game. Leaky Pandy mentions other changes to the game, such as the absence of coins, only one item slot, and two item boxes: big and small. Naturally, bigger boxes will grant more powerful items, while smaller boxes will grant items whose effects are of smaller consequence. Of course, passing through a big box while holding a small one will automatically upgrade the held box into a bigger one.

It’s worth noting that this information wasn’t corroborated by Nintendo or anyone working on the alleged Mario Kart 9 video game. So all information should be taken with a grain of salt, as it is subject to change. With that said, some of that information aligns with our previous report, in which Tokyo-based industry analyst Dr. Serkan Toto disclosed that Mario Kart 9 is in active development. And that the game will introduce new features to its gameplay. Of course, he refrained from adding or disclosing any further information, but that didn’t stop the fandom from speculating what those new features might be — and some of these suggestions sound great.

Part of the fandom suggested that the game that makes you happy could introduce more crossover characters from non-Nintendo franchises, while others have suggested different tracks for a more Formula 1-type of experience. Apparently, the suggestions of both sides seem accurate, at least according to Leaky Pandy. 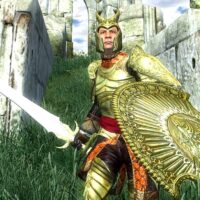