Tim Allen has been mostly known for taking blue-collar roles with the actor inhabiting characters who are typically dense about much of the nuance in the outside world. Career-wise, it’s served him very well with two long-running shows under his belt. But for a brief moment in time, we were able to catch the actor leaning into a little sci-fi action. And there’s some chance we get back to see him again in the role. Allen recently talked about the script for a possible sequel to Galaxy Quest.

In an interview with Entertainment Weekly, Tim Allen did muse on the Galaxy Quest sequel script which he calls “fabulous”. It’s been around for some time now, getting close to actual production a few times within the last decade but never quite getting over the hump. He says the sequel would expand on the original characters’ respective stories while adding more of the tongue-in-cheek humor we saw from the all-star cast the first time around.

Of course, one of the main reasons Tim Allen and the Galaxy Quest crew never had another movie made was the untimely death of Alan Rickman from pancreatic cancer. As it goes, in 2016 when the actor passed away, a number of folks involved with the first movie had come out and said that they were close to a sequel. But those plans were put on hold with Rickman’s character having been central to the new story. Since then, there have been a number of starts and stops around getting it into production.

Here’s one of the quotes from Tim Allen about why the script for the sequel was delayed because of Rickman’s death:

“It’s a fabulous script, but it had a hiccup because the wonderful Alan Rickman passed. So it all got very sad and dark because (the script) was all about (Lazarus) and Taggart. It was all about their story. It doesn’t mean they can’t reboot the idea, and the underlying story was hysterical and fun.”

But apparently, Tim Allen remains bullish on one day getting a sequel up on to the screen. Also in the interview, he said the new story involved traveling at the speed of light which would mitigate issues around the cast having aged considerably over the last two decades. With this form of travel, time becomes somewhat irrelevant so they could plop themselves almost in any timeline.

The original Galaxy Quest came out in 1999 and featured an all-star cast of Tim Allen, Alan Rickman, Sigourney Weaver, Sam Rockwell, Tony Shalhoub and Daryl Mitchell. They play the cast of the *famous* television show of the same name. It’s a Star Trek rip off and the characters are mostly known for traveling the fan circuit. The rub is a race of aliens actually think the show is real and enlist the cast to take up a real space mission to fend off another group of alien attackers.

Tim Allen is excellent in the movie as the aging captain of the crew and critics ate it up with a 90% score on the Tomatometer. But it mostly flamed out at the box office, barely with the $90.7 million barely doubling the $45 million budget. That’s one of the reasons there wasn’t a sprint to produce the next film in the story.

Whether we ever get Tim Allen back at the captain of the Protector in a Galaxy Quest sequel remains to be seen. But it’s great to know a solid script is waiting in the wings if they ever get a chance. 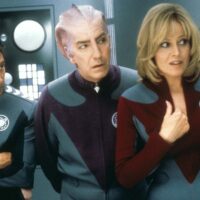