This Galaxy Quest Actor Never Wants A Sequel, And Here’s Why Galaxy Quest never seems to get the credit it deserves. Sure, you’ll be hard pressed to find a science fiction fan who didn’t like it, but, some 15 years after it hit theaters, Galaxy Quest remains a beloved cult classic…but also just a one-off. In this age of sequels and shared cinematic universes, it seems amazing that we never got more Galaxy Quest than we did, even though rumors and whispers about a sequel continue to pop up every now and then. But there’s one Galaxy Quest actor who is just fine with Galaxy Quest being the one and only Galaxy Quest.

The folks over at io9 were interviewing actor Enrico Colantoni about CBS’s Person of Interest recently, and they decided to shift the topic to Galaxy Quest. We loved Colantoni as Veronica Mars’ long-suffering P.I. dad back in the day, but he was also stellar as the Thermian leader Mathesar in GQ, who kidnapped Jason Nesmith (Tim Allen) and the rest of the Galaxy Quest actors to help save his species from some very real and very nasty alien warriors. But Colantoni isn’t keen to return to the role. He told io9:

I think it’s a great movie all by itself. It stands alone, and to make something up, just because we love those characters, and turn it into a sequel — then it becomes the awful sequel. [Laughs] That’s just my personal opinion. I think it’s perfect just the way it is. It’s standing the test of time. People are rediscovering it. New generations are discovering it again and again, and it’s just perfect. Unless they can make it as good as the first one, which I don’t know how [you could do that].

I get where the guy is coming from, but that isn’t going to stop me from keeping “Galaxy Quest 2” off my list of fondest wishes. Especially since, at this point, a sequel almost certainly wouldn’t be a cynical cash grab. It’s been 15 years since the first one came out. It earned $90 million worldwide against a reported budget of $45 million, so it was a success but not so huge a success than a sequel was a given (obviously). If Galaxy Quest 2 is ever going to happen, it’s going to happen because people who love it make it happen, not because some MBA at a studio thinks it’s the Next Big Thing.

There are so many places a new Galaxy Quest story could go, especially given how well the original satirized and commented on both Star Trek in particular and science fiction film and television in general. Well, look around — science fiction is booming on both the big screen and the small, so there’s no shortage of areas GQ2 could skewer. I could easily see a sequel taking aim at the idea of J.J. Abrams’ Trek films: how would Jason Nesmith and the rest of the show-within-a-show’s cast react to their series getting rebooted with hotter, younger actors? Maybe Nesmith and company get called back into actual action in outer space again, and the new guys get dragged along as well. I’m just spitballing, but it just seems clear to me that a Galaxy Quest sequel would be not only welcome, but timely as well.

Of course, there have been other Galaxy Quest stories since the movie, even though you likely hadn’t heard about them. IDW Publishing released Galaxy Quest: Global Warming back in 2008, a sequel that saw the show-within-a-show getting a Next Generation-style revamp, with Nesmith and company naturally being called into action to save the day once again. You can purchase Global Warming on Amazon. IDW also has a new Galaxy Quest series, entitled The Journey Continues, in the works. You can see cover art for the first of four issues below, with it set to release on January 28, 2015.

Once upon a time, a troupe of has-been actors that starred on an old sci-fi show were enlisted by an alien race to save them from an intergalactic tyrant. Despite being way out of their depth, the cast somehow managed to save the aliens and stay alive… but their actions in outer space may have had dire consequences for another world. Join us this January as the cast of GALAXY QUEST returns for another bombastic journey into space! It’s not a new Galaxy Quest movie, but hey, I guess you take what you can get. 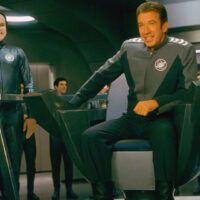