The Boys was quite the surprise sensation when its first season hit Amazon Prime Video last year. The adaptation of Garth Ennis and Darick Robertson’s twisted take on superheroes struck a chord in reviews from viewers and now the second season is here to gauge if this was just a one-time fluke or something really special.

If The Boys season two is any indication, this show could run for quite a while. The second season of the dark satire is firing on all cylinders. It is very likely that the first season was a way to gauge whether or not audiences were going to be up for such a demented riff on superheroes. Clearly, that experiment was a success because this second outing is leaning even harder into the violence and insanity. There are a few gory moments that rank as some of the nastiest in the show’s short history. If you are looking forward to more bloodshed, The Boys is going to satisfy your hunger.

But, it is not just loads of gore that makes The Boys season two a winner. The series has established itself as a sharp and caustic satire, and the second season continues to bring that same level of acerbic wit to the story. While the show is certainly a takedown of popular superhero tropes, it is also taking a stab at subjects like American exceptionalism, the false narratives surrounding celebrity culture, and the military-industrial complex. To be honest, it is more than a little impressive to see such biting and unrepentant takes in a flagship streaming show. No quarter is given and it adds a necessary layer of unpredictability and danger to the show.

Adding to that element of surprise is the uniformly great cast. All the returning players have settled into their roles and are knocking it out of the park. Antony Starr was the breakout of the first season and he continues to bring incredible menace to the role of Homelander. His erratic and volatile nature makes him a constant source of tension, especially when his power and control begin to be threatened. Homelander was always scary but he is even scarier in this season. Plus, newcomer Stormfront (Aya Cash) starts to steal the show as a new member of the superhero group, The Seven. Her flippant and combative attitude brings a new dynamic to The Boys that is most welcome.

The Boys also ups the ante in season two with its overarching plot. Not only are Butcher (Karl Urban), Hughie (Jack Quaid), Starlight (Erin Moriarty), and the rest of our heroes still trying to expose the devious plans of the Vought corporation, but now there is a superpowered terrorist on the loose in America. Homelander’s plan to create supervillains has worked but it has now caused an upset in the power structure Vought has maintained for so many years. It is commendable just how well the second season is able to juggle quite a number of individual plotlines without dropping one of them along the way. And, of course, there are plenty of fun surprises as the season progresses, including some appearances from a few notable actors in some very cheeky roles.

The Boys has now cemented itself as a superhero show for adults that want a lot more complexity and cleverness from the genre. If the first season of The Boys was a mission statement regarding what superhero stories could do, the second season doubles down on that. All of the cutting satire has been honed to a razor’s edge, the surprises are well-structured and always a treat, and the cast has become even better. It is truly superb to see such an R-rated, comedic, and sharp production get made in the superhero landscape.

The Marvel Cinematic Universe seemed to put a definitive stamp on the superhero genre and everyone was trying to follow their lead. The Boys is a deliberate and pointed refutation of that mold and a successful execution of that goal. If the series can keep this kind of energy, smarts, and fun coming at a regular pace, there is no reason that The Boys shouldn’t last for another three seasons or longer. This is one of the best shows you can be watching right now and here’s hoping its future is as bright and bonkers as this second season.

The Boys Season 2: Jensen Ackles Cast As A Classic Superhero 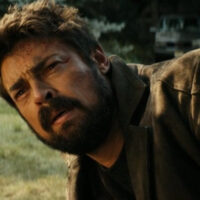