Sebastian Stan has come fully into the limelight playing a rather unlikely hero in the Marvel Cinematic Universe. That character has gone through the full arc, starting off good, going completely bad, and finding plenty of redemption in the last few stories. His Bucky Barnes is one of the true heroes of the franchise. But for his next production, Sebastian Stan is taking things in a totally different direction, starring in a bio-series as a dude whose hedonistic story dominated tabloid headlines for quite some time.

Now Sebastian Stan is giving another glimpse of what he’s looking like as Tommy Lee in what is sure to be a possibly salacious new show coming to Hulu. The limited series is called Pam & Tommy and will detail the relationship between Lee and Pamela Anderson in the mid-90s. During the time they were among the biggest tabloid fodder around, putting together two outlandish and iconic figures together. Take a look at what Sebastian Stan is looking like as Lee:

Man, if this wasn’t the perfect casting then I don’t know who would have been? Sebastian Stan looks like a near replica of Tommy Lee from that era with the black-parted hair and tattoos to match. It’s a striking resemblance and should make for maybe even an uncanny valley feel when he premieres on the Hulu series. The show will follow the relationship of Lee and Anderson during the tumultuous time following their marriage and the infamous release of their honeymoon sex tape that was among the first viral things the internet ever produced.

And starring opposite Sebastian Stan is Lilly James who also looks every bit the part of Pamela Anderson. The above Instagram post is another eery one considering the resemblance and it’s almost like we are looking back in time through some kind of 90s filter. Transported back to the moments these two were the literal talk of the entertainment world. How the series plays out remains to be seen, but there’s no questioning the leads are fully bought in on looking the part down to every piece of style and the general rock star gestalt they brought to their public and private lives.

And there’s a good chance that Pam & Tommy lives up to the critical hype as well. Not only are Sebastian Stan and Lily James looking the part, but director Craig Gillespie will be helming the series. He’s put out a number of well-received films, but in this genre, he is best known for his work on another critically acclaimed bio series. That was  I, Tonya which told the story of Tonya Harding and her infamous planned assault on Nancy Kerrigan at the Olympics. The Margot Robbie-led film was up for a number of different awards and was a runaway critical success.

Sebastian Stan and company just started filming the series in April of this year so there’s no clear timeline for the release of Pam & Tommy. But when it does drop it’s almost sure to be a 90s nostalgia trip, back to a simpler time when rock stars could marry famous actresses and have their literal every movement documented in the tabloids and press. Oh, wait, not much has changed. 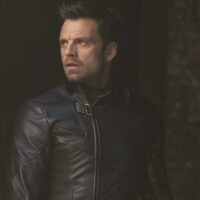 Sebastian Stan Explains Why He Did Nudity