Deadpool, Black Adam, and Wonder Woman all in the same movie? Well, no, not really, but Netflix’s Red Notice gives us the next best thing — the actors who play all the various superfolk in an upcoming action comedy. Ryan Reynolds, Dwayne Johnson, and Gal Gadot come together to stab each other in the back as many times as possible in Red Notice and a new full trailer for the film is here, less than a month from its release.

The beginning of the trailer reveals Ryan Reynolds as Nolan Booth, the second most wanted art thief in the world. At least, that’s according to Dwayne’s Johnson’s FBI Special Agent John Hartley who arrests Booth in order to recruit him to take down bigger game — Gal Gadot’s Sarah Black. Apparently a prolific hacker, Black is able to manipulate online data to frame Hartley for crimes and get him thrown in prison alongside Booth. The bumbling art thief agrees to help Hartley clear his name and take out his biggest competition. You can watch the trailer below.

Of the three megastars, Dwayne Johnson’s name was the first attached to the film, and it’s proven to set a record in his career. In February 2018, Deadline reported that Johnson was taking in $20 million from his work on the film — the first such payday he’s received for a single movie. A year ago, Forbes reported that Gal Gadot got the same payday for Red Notice, helping to make her 2020’s third highest paid actress behind Sofia Vergara and Angelina Jolie. Ryan Reynolds was the last of the trio added to the film. There’s no word on how much he’s taking home, but we’re guessing he didn’t do it just for free chimichangas.

Like a lot films these days, Red Notice spent a long time dealing with delays, including when filming in Italy was halted in early 2020 when COVID-19 hit the country. Soon after that announcement, in March 2020, it was announced production on Red Notice was delayed indefinitely. Six months later, filming resumed and we’re finally about to see exactly what Dwayne Johnson, Ryan Reynolds, and Gal Gadot are getting those big paychecks for.

This won’t be Ryan Reynold’s first time in a Netflix original film. In 2019, Reynolds starred in Michael Bay’s 6 Underground that premiered on the streaming service. Then there’s the upcoming time travel flick The Adam Project, directed by Shawn Levy who collaborated with Reynolds on the runaway hit Free Guy. While it won’t release until next year, in August Reynolds revealed almost as soon as Free Guy wrapped production, work on The Adam Project began. Reynolds plays the movie’s hero, who travels back in time to get the aid of his 12-year-old self, played by Walker Scobell, in confronting his father. Levy said to expect an action/comedy mix in the vein of Back to the Future, but said its emotional core is owed chiefly to two inspirations: the 2000 sci-fi thriller Frequency and the 1989 fantasy Field of Dreams.

But before The Adam Project, get ready for Ryan Reynolds, Dwayne Johnson, and Gal Gadot to make you laugh and wince in Red Notice. The film begins streaming on Netflix on Friday, November 12. Get your popcorn ready. 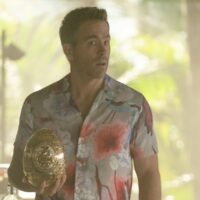